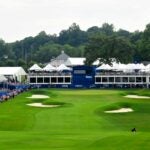 Unlike last year, the 2020 Wyndham Championship will be played without fans.

The first round of the 2020 Wyndham Championship, the final tournament of the PGA Tour regular season, kicks off Thursday in North Carolina. Here’s everything you need to know to watch the first round.

For Brooks Koepka, the 2020 PGA Championship went according to plan… until it didn’t. The four-time major champion seemed poised for a PGA three-peat before crumbling with a 74 in Sunday’s final round. Koepka will try to make up for that disappointment with a solid showing at the Wyndham this week.

For Thursday’s first round, Koepka is paired with two other major champions, Justin Rose and Jordan Spieth. Spieth is another player still licking his wounds after a T71 at the PGA. This week, he hopes to build off his encouraging final-round 67 at TPC Harding Park to get back in the winner’s circle. Koepka, Rose and Spieth tee off at 7:50 a.m. ET on Thursday.

Other players to keep an eye on in the opening round are Paul Casey, who is coming off his best finish in a major, Patrick Reed, Webb Simpson and defending champion J.T. Poston.

Here’s all the information you need to watch Thursday’s first round of the 2020 Wyndham Championship.

How to watch Wyndham Championship Round 1 on TV

Golf Channel will have the action for the first round of the 2020 Wyndham Championship and will air four hours of coverage on Thursday, 2-6 p.m. ET.

How to watch Wyndham Championship Round 1 online

You can catch the full first round Golf Channel broadcast of the Wyndham Championship on golfchannel.com. Fans can also view Featured Group coverage of the opening round all day Thursday via PGA Tour Live, though you will need a subscription to access both options.

10 things I noticed wandering Winged Foot at the U.S. Open

Pro makes cut at U.S. Open in the most impressive way possible