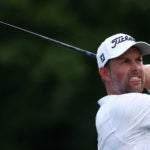 Webb Simpson hits his tee shot on the 18th hole at Detroit Golf Club on Friday.

On the par-4 16th, Webb Simpson lifted his ball from the center of the back-left greenside bunker. It bounced a few times and rolled in. Birdie

The second-round leaders had holed out for birdie from a third of the holes on the back nine.

Kirk combined his two birdies with six others to shoot a 7-under 65, and Simpson added seven more birdies to fire a 8-under 64, and each sits at 12-under after two rounds. Five players are at 11-under.

Last May, Kirk announced he was taking a leave of absence from the game to get a handle on his alcoholism and depression. Just over a year later, he’s a leader at the halfway point of a PGA Tour tournament.

‘I think that a few years ago, among other things, golf was definitely wearing on me and I definitely lost the joy of playing and competing,” Kirk said. “Now, you know, after being away from it and not knowing if I would really play again or not and choosing to come back just because I love to play golf, so that’s why I’m here this week. I love to play golf and I love to compete, so it’s a lot easier to keep that in the forefront of my mind now.”

Kevin Kisner and Sepp Straka are two shots back, and nine golfers are three shots back.

Among the players not making the cut to weekend play were Patrick Reed, Vijay Singh, Jason Day and Bubba Watson.