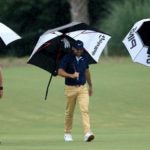 Each week on the PGA Tour, a new set of tee times and groupings is released. Generally, players get new partners to play alongside each week. According to Bubba Watson, that can carry plenty of influence.

Speaking to reporters in a virtual press conference Tuesday at the Travelers Championship, Watson said that who he is grouped with can amount to as much as a couple of strokes. What leads to those strokes was left unclear, but Watson’s opinion was quite apparent. Below is how the exchange played out.

Q. Do you care who you play with?

Q. Yeah, when the sheet comes out on Tuesday or whenever, does it matter to you?

Watson: Yes, it matters tremendously. There’s guys that are a shot, maybe a two-shot penalty when you see their name [next to yours] on that sheet. Maybe that’s what they say about me, too, so I guess it works both ways. I like to have fun and be energetic. You know, when you see a certain name, you know you can joke around, you know you can have fun and kind of get away from the stress and not talking and just walking down the fairway.

Yeah, I look forward to seeing who the pairings are and sometimes I start praying early trying to get a good one.

Clearly Watson’s groupings matter a lot to him. But who are the players costing him a shot or two during their rounds together? That list is left for us to figure out down the line.

Coincidentally, the energetic vibe he gives off might have an adverse effect on his group as well. When pitted against the likes of Kevin Na, one of the slowest players on the PGA Tour, a majority of Tour players said they’d prefer playing with Watson. However, one of those players who chose Na over Watson offered, “At least Kevin will be quiet.”

Enough said! This week Watson is grouped with Sung Kang and Wesley Bryan. Hopefully that tee sheet looks just fine to him.