Webb Simpson: The safest place in the U.S. right now is the PGA Tour 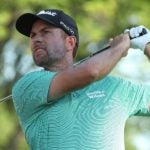 Webb Simpson hits a shot on the 15th hole at the Detroit Golf Club on Thursday.

Coronavirus cases in the United States are at their highest level since tracking began at the beginning of March, according to the New York Times. Thirty-eight states have seen an increase over the past 14 days, including Texas, South Carolina and Michigan, three of the four states where the PGA Tour has played in the four weeks after its three-month hiatus due to the pandemic. The fourth state, Connecticut, has had mostly the same amount of cases.

“I mentioned to the commissioner last week that based on our numbers, our stats, I told him the safest place anyone can be in the United States right now is on the PGA Tour,” he said before play at this week’s Rocket Mortgage Classic in Detroit. “I mean, we had at that point, that conversation, we had I think seven out of 2,300, 2,400 positive, which is amazing. So the lengths that the Tour is going to to make sure every place we go is safe and secure and our testing and all that, I feel very good about being out here.”

In all, six players have received positive tests on the Tour – Nick Watney at the RBC Heritage two weeks ago; Cameron Champ before the Travelers; Denny McCarthy at the Travelers; and Dylan Frittelli, Harris English and Chad Campbell before the Rocket Mortgage. Simpson, himself, withdrew from last week’s Travelers Championship as a precaution after one of his daughters tested positive for the coronavirus.

Simpson said his daughter’s test was “a fluke thing.”

She had banana stuck in her throat, his wife, Dowd, wanted to make sure their daughter’s tonsils were not swollen, and a coronavirus test came back positive. His daughter was tested again, as were he, Dowd and their other four children, and all results came back negative.

“We felt confident that she never had it,” said Simpson, whose withdrawal came one week after winning the RBC Heritage. “Never had any symptoms, no one else had it. We felt great, but obviously a lot of support I felt not only dropping out of Travelers, but just from everyone wishing my daughter well. And it’s a bit odd, I feel like in this pandemic, because a lot of times people might have it and they don’t have any symptoms, or a case like my daughter’s, who we don’t believe had it, and you’re getting these well wishes. So it’s a bit of an odd time.”

Simpson has found comfort in the Tour.

Before the first tournament back, the Charles Schwab Challenge three weeks ago, players were issued protocols that detailed safety on and off the course. They’ve also been revised more than five times, including Wednesday night, when the Tour said it will now allow asymptomatic players and caddies who tested positive back into competition after receiving two negative tests 24 hours apart without symptoms.

Simpson said the players, too, are being more accountable.

“I think this being the fourth tournament, I think guys are so aware of how easy it is to catch this disease that I think everyone else is becoming more strict,” Simpson said. “That first week at Colonial, there were still fist bumps after the round, closer contact I think on the range or player dining. There’s way less of that now. Now, nobody’s touching; maybe an elbow here or there. I’m definitely seeing how it’s affecting everyone, not just those who have had contact with someone.”