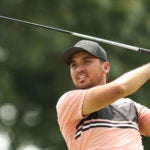 Jason Day hits his tee shot on the 18th hole at TPC River Highlands on Saturday.

Jason Day tested negative for the coronavirus on Saturday, a couple of hours after he had requested a test before the third round of the Travelers Championship and was reassigned to play by himself in the final tee time.

Day was originally scheduled to play in the 8:09 a.m. grouping off the 10th tee with Rafa Cabrera Bello and Roger Sloan after making the second-round cut. He was then moved back to 9:15 off the 10th, the same time as the leaders off the 1st tee at TPC River Highlands.

Had Day tested positive, he would have had to withdraw immediately and quarantine for at least 10 days. He played with Kevin Kisner and Kevin Chappell the first two rounds of the Travelers.

Day’s test follows several players and caddies who withdrew this week at the Travelers, the PGA Tour’s third tournament after its three-month hiatus due to the coronavirus.

On Friday morning, Denny McCarthy became the latest, withdrawing after testing positive before his second round. One of his first-round playing partners, Bud Cauley, withdrew as a precautionary measure, while the other, Matt Wallace, elected to play and did so alone. The PGA Tour also announced Saturday that all people who had come in contact with McCarthy had tested negative on follow-up tests.

“Everybody knows and needs to know that our future, our ability to sustain this business and to impact the communities where we play and to create so many jobs is contingent on our ability to follow those protocols,” he said. “So when we have instances where someone hasn’t, they will be dealt with, and as I said, the consequences will be significant.