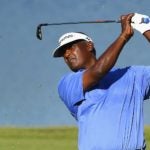 Vijay Singh has withdrawn from the Korn Ferry Tour Challenge in mid-June.

Well, so much for that controversy. Vijay Singh has dropped out of the Korn Ferry Challenge at Dye’s Valley at TPC Sawgrass, just a few weeks after drawing heated criticism from Korn Ferry Tour pros for his decision to enter the event.

Singh’s withdrawal from the Korn Ferry Challenge was first reported by Golf Channel and comes two weeks before the event is scheduled to mark the resumption of the Korn Ferry Tour season.

In early May, Singh’s entrance into the Korn Ferry Challenge drew the ire of some still cutting their teeth on the developmental tour. The event’s $600,000 purse marked a crucial financial opportunity for developmental tour players, many of whom are struggling financially as a result of the worldwide sports shutdown caused by the coronavirus. In the eyes of some, Singh (who ranks 4th all-time on the PGA Tour’s money list) was taking a spot away from another, less financially secure player.

“Hey @VijaySinghGolf you are a true piece of trash if you except (sic) money playing in a Korn Ferry Tour event and I’ll say it right to your face,” Schnell tweeted. “Do you know how much those points and money could do for a young kid? He’s a complete turd for playing.”

Schnell later apologized for his barrage against Singh, but his point sparked a larger debate surrounding one of golf’s most enigmatic players. Was Vijay, a professional golfer, wrong for choosing to play professional golf, even if it meant taking a spot away from someone else? On social media, people weighed in from all corners of the golf universe. Phil Mickelson even joined the conversation in Singh’s defense.

Ultimately, Vijay-gate 2020 vanished as quickly as it appeared, a strangely fitting ending for one of golf’s most understated figures. But whether you felt he was in the wrong or not, Vijay Singh won’t be there when golfers tee off in Ponte Vedra Beach, Fla. on June 11.