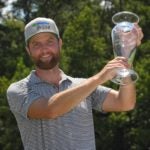 Chris Kirk overcame a four-shot deficit on Saturday to claim his first win since 2015.

Tour veteran Chris Kirk has four career wins on his resume, but the 35-year-old announced he was taking a leave of absence from the game last May when he realized that his drinking was out of control, and he needed some time away from golf to get a handle on his addiction and depression.

For six months, Kirk did the necessary work, including therapy and working the 12 Steps. He returned to competition at the Mayakoba Classic in November, but his T33 finish there was followed by missed cuts in his next five events.

At last week’s Charles Schwab Challenge at Colonial, Kirk made the cut but finished T60. Because he was listed as an alternate for this week’s RBC Heritage, he opted instead to play the Korn Ferry Tour’s King & Bear Classic at World Golf Village in St. Augustine, Fla. — a decision that turned out to be fortuitous, to say the least.

Kirk fired rounds of 66-65-64-67, making up a four-shot deficit on Saturday to win the tournament by one shot over Justin Lower. It was Kirk’s fist victory on any Tour since his 2015 win at Colonial, and given what he’s been through over the past couple of years, this victory is especially notable for Kirk in terms of the perspective he’s gained.

“For months, I didn’t think I wanted to do this anymore,” Kirk said after his round. “I didn’t want to beat my head against the wall anymore, but after not playing for a few months it was easy to remember why I love playing and competing. There are times it can beat you down, but the success and the good times are well worth it.

“I’m a completely different person than I was two years ago,” Kirk continued. “When you’re faced with a situation where you’re completely out of control of your own life, it changes things. But taking that break and getting some help gave me some perspective that maybe this isn’t as important as we make it out to be. Yes, it’s my career and my passion and what I love to do, but there are bigger things in life. I can’t wait to get home tonight and give my wife and three boys a hug and that’s what I care more about now.”

As for carrying his newfound momentum onto the grander stage of the PGA Tour, Kirk is hopeful that he can do that, too.

“I know my good is plenty good enough,” he said. “It’s just a matter of seeing and feeling it.”