WATCH: This pro nearly stops his swing – right at impact 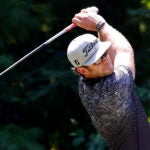 Lanto Griffin hits his tee shot on the 9th hole at TPC Boston on Friday.

Griffin addressed his ball on the 182-yard, par-3 16th hole at TPC Boston. He took his 8-iron back during Thursday’s first round of the Northern Trust. He barely took it forward. He immediately and awkwardly stopped his follow through after hearing two slams at the top of his backswing.

In about three-quarters of a second, he started his swing, heard the noise, continued his swing and appeared to have tried to stop his swing.

The ball landed 26 feet, 11 inches away from the hole.

“Heard a bang at the top and scared me,” Griffin wrote on his Instagram account under a video of the tee shot. “Solid 8i that flew 178 to 25 feet but you could probably tell from the finish. #needtofocusbetter.”

Griffin looked to his right after the shot, took a step to the right, then looked forward as he held his club against his shoulder. Along the left side of the hole was water, and along the right were trees. Griffin’s ball went straight.

“Oh, isn’t that a follow through? Wow,” analyst Nick Faldo said on the Golf Channel broadcast.

Griffin rolled his birdie putt just to the right of the hole before making his par. He finished with a 3-under 68, then shot another 68 on Friday.

He almost didn’t take one of the shots.