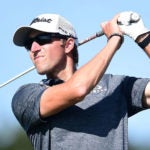 Richy Werenski tees off on the 18th hole at TPC Twin Cities on Thursday.

Richy Werenski is ranked 248th in the world. No player was better on Thursday.

Werenski birdied half of his holes on his way to an 8-under 63, his best score ever in relation to par. He was one shot ahead of Michael Thompson, two shots ahead of seven golfers, including Tony Finau and Matthew Wolff, and three shots better than 10 golfers.

Wolff, the defending champion, made eight birdies, and Finau, a week removed from holding a share of the lead through two rounds at the Memorial, made seven on their way to 6-under 65s. Joining them at two back were Max Homa, Ryan Moore, Xinjun Zhang, Nick Watney and Bo Hoag.

At 5-under were Kyle Stanley, Brendon de Jonge, Talor Gooch, Patrick Rodgers, Bronson Burgoon, Robert Garrigus, Charl Schwartzel, Aaron Baddeley, Chris Kirk and Bo Van Pelt, who made a hole in one on the 195-yard, par-3 8th. Seven golfers were at 4-under, and 14 golfers were at 3-under.

Brooks Koepka, the sixth-ranked golfer in the world, shot a 1-under 70.

Dustin Johnson is out

He played his middle six holes at 9-over and finished at 7-over 78 – tied for last in the 156-player field – before withdrawing from the tournament later in the afternoon with a back injury.

He hit his eighth shot to within 3 feet of the cup. He tapped in for a 9.

“Hit a great drive on 18, and we only had like 199 to cover from where I was, 208 flag. It was a perfect 6-iron,” Johnson said. “Hit it right at it, and never once did I think it was going to go in the water. That never crossed my mind when it was in the air. Just went in the water, and I hit two more shots in the water, then I hit a good one, made a tap-in for a 9.”