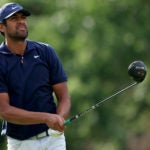 Tony Finau put it all together during Thursday's opening round.

Most players laid up on no. 14 on Thursday. That’s understandable — Muirfield Village‘s shortest par-4 still measures 366 yards, and water guards the front and right side of the green. Tony Finau? He hit driver long.

That’s right: Finau’s tee shot carried 350 yards, went 373 in total and he got up-and-down for birdie — kicking off a run of four birdies in his final five holes en route to 6-under 66, the low round of the day.

According to Finau, fans should get used to watching him hit the long ball. He made it clear during his off-week last week that he was looking to enter the distance game, showing off one smash that showcased 206 mph ball speed (a 383-yard carry at home in Utah). Now? He’s putting some of that speed into game play.

It’s impossible to mention distance gains without mentioning Bryson DeChambeau, who hit two drives over 400 yards on Thursday. Finau acknowledged that DeChambeau’s gains had pushed him to chase some distance of his own.

“Yeah, it no doubt inspired me,” Finau told Golf Channel’s Todd Lewis after his round. “I don’t think what he’s doing is rocket science, but it’s executing at that speed. Being able to see him swing that fast and hit it that straight got me thinking, for sure.”

During his off-week, Finau and coach Boyd Summerhays focused on speed and distance and, to quote Finau, he “went after some.” That’s where the viral video came from.

Now Finau says he’s hoping to hit tee shots in tournament play in the low- to mid-190s in ball speed. If he can hit it straight at that speed, “that’s going to be a huge advantage.” He hit 190 ball speed at least once and was in the upper 180s on several others, including the tee shot at 14, which clocked in at 187.2 mph.

DeChambeau led the field in total driving distance, averaging 326.2 yards on all measured tee shots. But Finau wasn’t far behind — he finished second on the day at 322.9.

“I tried it out there on a couple drives and was able to execute them, so I’m going to start bleeding that into my game. And why not?”

Again, it’s hard to resist dropping in anything about driving for show and putting for dough, because we should acknowledge that Finau’s low round had as much to do with his shortest club as it did with his longest. He gained 4.41 strokes putting, best in the field. That’s tougher to replicate.

So when will Finau decide to unleash his biggest tee balls?

“It depends on the hole,” Finau said. “It has to be open enough for me to feel like I have the space to make that type of swing. The mechanics don’t really change, it’s just hitting it a little bit harder.” It sounds simple, when he says it like that.

One thing’s for sure: if Finau can hit it the longest and putt it the best, there’s a good chance we’ll see his name sticking around the top of the leaderboard the rest of the week. The distance race may officially be on.