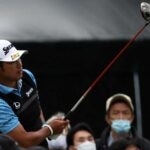 Masters champion Hideki Matsuyama is in contention early at the 2021 Zozo Championship.

The 2021 Zozo Championship resumes on Thursday night with the second round at Narashino Country Club in Japan. Here’s what you need to know to watch Round 2 on TV or online.

The Zozo Championship is making its welcomed return to Japan this year, and so far the local fans at the only fully-sanctioned Japanese PGA Tour event are being treated to great performances by the country’s best golfers.

Hideki Matsuyama, who solidified his stardom with a win at the 2021 Masters, is in contention early after firing a first-round 64 to get to six under. Despite being only one shot back, he didn’t have the lowest score among Japanese golfers. That honor belonged to Hiroshi Iwata, who made six birdies and an eagle to take the lead at seven under.

As with Round 1, the second round will begin late at night on Thursday for viewers in the United States, with TV coverage kicking off at 11:30 p.m. ET. Below you will find everything you need to watch the second round of the 2021 Zozo Championship.

Golf Channel will carry the second round of the 2021 Zozo Championship with three hours of coverage beginning Thursday night at 11:30 p.m. ET and ending at 2:30 a.m. ET on Friday morning.

You can stream the second round Golf Channel TV coverage of the Zozo Championship on golfchannel.com. Fans can also view Featured Group coverage of Round 2 on Thursday and Friday via PGA Tour Live with a subscription.

How to bet on the Zozo Championship

Looking to make a (legal!) wager yourself? We teamed up with BetMGM, and the online sportsbook is offering a “Risk-Free Bet” up to $1000 promotion. Sign up for an account to get into the action today.