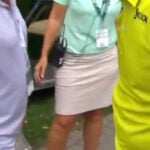 The scene on Friday to the right of the 10th hole at Liberty National.

Hideki Matsuyama walked up, raised his right index finger slightly and asked: “You?”

And the man pointed to his right hip — where the golf ball of this year’s Masters champ was attached to.

“What in the world? What are the odds?” analyst Nick Faldo said on the Golf Channel broadcast.

In a wild scene during Friday’s second round of the Northern Trust, Matsuyama hit his drive right on the 506-yard, par-4 10th at Liberty National, it bounced once on a cart path and it bounced again. We’ll let a man in a light blue golf shirt explain what happened next.

“It went between my legs, hit my knee and somehow rolled up my shirt,” he said.

Somehow is right. Golf Channel slow-motion replay would show the man look down, freeze, then point to his hip. From there, the Rules of Golf, under Rule 11.1 “Ball in Motion Accidentally Hits Person or Outside Influence,” covered the scenario. Admirably, the fan never moved until the situation was resolved.

Under the guidance of a rules official, Matsuyama dropped a tee next to the man’s right foot, he took out a driver to measure his relief distance — and only then was the man instructed by the official to shake the ball free. It dropped out, Matsuyama would sign it and give it to the man, and Matsuyama would take his drop.

In a tweet, the PGA Tour pointed out that it was reminiscent of a scenario at the 2014 Tour Championship, where a Rory McIlroy drive dropped into a fan’s shorts pocket.