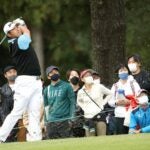 Hideki Matsuyama didn't make a bogey in his first round at the Zozo Championship.

Hiroshi Iwata shot a seven-under 63 to take a one-shot lead after the first round of the Zozo Championship on Thursday, as the country’s first-ever PGA Tour tournament returned to Japan for the first time since 2019.

And, after 18 holes, two Japanese players are in the top three.

In his first Tour start since 2017, Iwata made just one bogey but added six birdies and an eagle, which came on the par-5 18th, his ninth hole of the day. The 40-year-old wasn’t even in the field until Monday but earned a spot when Kevin Na withdrew.

Joaquin Niemann and Hideki Matsuyama are both one back after 64s, with Matt Wallace (65) alone in fourth.

A few of the Tour stars who traveled to Japan for the Zozo have work to do. Rickie Fowler and Xander Schauffele are both T29 after even-par 70s, and Collin Morikawa is T42 after a 71.

Fowler is coming off a T3 at The CJ Cup in Las Vegas, and the last time Schauffele played a tournament in Japan he won the Olympic gold medal.

Schauffele got hot early with three birdies in his first five holes, but he was two over on the back nine.

“Good and bad,” he said. “I was three under early and finishing even par is not too fun, but didn’t shoot myself out of it. Got some work to do coming in. … I can’t expect to win hitting the way I did the last 12 holes, so I’ll have to go and find something on the range.”

One key change for this year’s Zozo? Fans on site. Tiger Woods won the first playing of the tournament in 2019 in Japan, but it was moved to the States in 2020, and Patrick Cantlay won without spectators on site. Now the tournament’s back in Japan, and so are fans.

“We play in front of a lot of fans on the PGA Tour State-side, but to be able to play in my home country in front of so many Japanese fans, it was a thrill and I’m glad I played well today,” Matsuyama said.

The second round of the Zozo will be broadcast on Golf Channel beginning 11:30 p.m. ET on Wednesday to 2:30 a.m. ET on Thursday.