Magnificent Matsuyama: Hideki wins the Masters for his first major 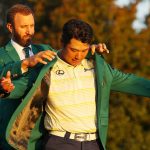 Hideki Matsuyama, in 2014, at the start of his professional career, had just won Jack Nicklaus’ Memorial Tournament for his first PGA Tour win, and both host and player were already dreaming of what was sure to come.

“This young man’s going to win a lot of golf tournaments,” Nicklaus said.

“One of my goals since I was a little guy was to win on the U.S. PGA Tour, and now that I’ve done that, my next goal now would be to win one of the four majors,” he said.

On Sunday, at Augusta National, after a small scare on the back nine, Matsuyama did what he and the Golden Bear thought he could do.

Matsuyama, after rounds of 69, 71 and a back-nine blitzing, third-round 65, shot a one-over 73 for a 10-under total and a Masters win, his first at a major. His margin of victory was one over Will Zalatoris and three over Jordan Spieth and Xander Schauffele. The magnitude of the win may not be able to be measured in his home country.

Matsuyama becomes Japan’s first male major winner, and the celebration may not end for a while. The country loves its golf. When asked Saturday what a win would mean back home, Matsuyama said he wasn’t even sure how he could answer. He’ll have time.

No response may be as good as either his ball striking or ability to bounce back. He entered the day with a four-shot lead over Zalatoris, Schauffele, Marc Leishman, and Justin Rose, and by the end of the 1st hole, it was down to one — Matsuyama bogeyed 1, while Zalatoris birdied 1 and 2.

Over the next 14 holes, Matsuyama played three-under golf. He birdied the 2nd, while Zalatoris bogeyed ahead, to build his lead back to three. He birdied the 8th. He birdied the 9th to take a five-shot lead into the back nine at Augusta. He bogeyed 12 but birdied 13, where his tee shot hit a tree off the left side of the fairway, only for it to ricochet back into a hittable second shot.

Schauffele would not go away, then suddenly did. After going bogey, bogey, double on holes 3 through 5, Schauffele played the next nine holes at six under. On the par-5 15th, Matsuyama hit his second shot into the water behind the green, he bogeyed while Schauffele birdied, and the lead was two. After 16, the lead was still two — though it was Zalatoris now in second. Schauffele hit his tee shot on the par-3 into the water, and he triple-bogeyed the hole to drop four back.

On 18, after his win, Matsuyama took off his hat, lifted his putter and smiled before the Augusta patrons.