2021 Wyndham Championship live coverage: How to watch Friday’s second round 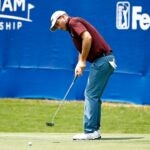 Russell Henley jumped out to the lead Thursday at the 2021 Wyndham Championship.

With 18 holes complete at the 2021 Wyndham Championship, players return to Sedgefield CC on Friday to fight for a tee time on the weekend. Here’s what you need to know to watch the second round on TV or online.

Russell Henley had already safely qualified for next week’s Northern Trust, the first event of the FedEx Cup Playoffs, before the Wyndham Championship began, but on Thursday he showed he has plans to stick around until the season-ending Tour Championship.

The three-time PGA Tour winner shot an incredible bogey-free, eight-under 62 in the opening round in North Carolina, good enough for the 18-hole lead. But with birdies coming easily so far this week, Henley will need a similarly flawless round on Friday to have a chance at hoisting the winner’s trophy Sunday evening.

Henley, who had an early tee time on Thursday, will play Round 2 in the afternoon wave, beginning his day in the third-to-last grouping at 2:05 p.m. ET alongside Jhonattan Vegas (five under) and K.J. Choi (four under).

How to watch Wyndham Championship Round 2 on TV

Golf Channel will air the second round of the 2021 Wyndham Championship with three hours of coverage on Friday from 3-6 p.m. ET.

How to stream Wyndham Championship Round 2 online

How to bet on the Wyndham Championship