Why Will Zalatoris, ranked 29th in the world, hasn’t qualified for the FedEx Cup Playoffs 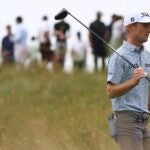 There's only one thing left for Will Zalatoris to do this season: win.

Will Zalatoris has quickly become a household name on the PGA Tour. The 24-year-old began making waves at the game’s top level by tying for 6th at the 2020 U.S. Open at Winged Foot. Zalatoris qualified for the event by leading the points standings on the Korn Ferry Tour.

Following his top-10 finish at the U.S. Open, Zalatoris was given a sponsor’s exemption into the PGA Tour’s next event, the Corales Puntacana Championship. He capitalized on the opportunity, finishing T8. The finish earned him entry into the next event, the Sanderson Farms Championship, where he missed the cut, but he accepted another sponsor’s exemption into the following week’s Shriners Hospitals for Children Open, where he edged closer to PGA Tour special temporary membership with a T5 finish. A T16 at the Bermuda Championship a few weeks later sealed the deal.

As a special temporary member, Zalatoris was then allowed to accept unlimited sponsor’s invites, instead of being limited to seven. In order to earn full status on the PGA Tour for the following season (2021-22), Zalatoris had to earn as many or more points through the non-member FedExCup points list as the No. 125 player in the 2020-21 FedExCup standings.

That turned out to be no problem. After Bermuda, Zalatoris notched five more top-10 finishes — including his star-making runner-up performance at the Masters — and T8s at both the PGA Championship and the WGC-FedEx St. Jude Invitational. He’s now ranked No. 29 in the world. Heading into this week’s season-ending Wyndham Championship, Zalatoris has amassed 1,270 FedEx Cup points — good enough for No. 26 on the list, and a fairly stress-free pathway to the Tour Championship. He would stand to collect some big checks along the way, not to mention a shot at the huge bonus money at stake in East Lake. There’s just one problem: As a non-member, Zalatoris isn’t eligible to compete in the playoffs.

Unfortunately, the work Zalatoris has put in this year guarantees him full PGA Tour membership for next season, which begins with the Fortinet Championship on Sept. 16 — but means nothing for this year’s playoff eligibility, unless he wins this week’s Wyndham Championship.

“Even if he’s ahead of me in the FedExCup Playoffs, I think he deserves to be in the Playoffs,” Webb Simpson said on Wednesday. “Nothing that the Tour has done wrong, I just think it’s a tool that really needs to be looked at and revised. He’s played long enough now and in enough events and played well enough, he deserves to be there. The only reason he’s not there is because of the way the rule is written, but I feel like I speak for pretty much all the players that I’ve talked to at least that Will should be in New York next week and it stinks that he won’t be unless he wins.”

What’s more, is that in any other year Zalatoris would already be a regular PGA Tour member. But when the pandemic erased some of last season, the PGA Tour decided no current members would lose cards, which meant Korn Ferry Tour leaders like Zalatoris weren’t promoted.

The good news for Zalatoris? He can still keep all the money he’s earned as a non-member this year, which currently totals a whopping $3.44 million.