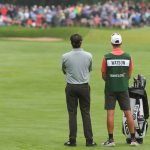 Bubba Watson is seeking his fourth career victory at the Travelers Championship.

The 2021 Travelers Championship in Cromwell, Conn. continues on Saturday, June 26th. You can find full third round tee times for the Travelers at the bottom of this post.

Notable pairings for Travelers Championship Round 3

Tournament leader Jason Day hasn’t won a PGA Tour event since the 2018 Wells Fargo Championship, but he’s in prime position to make a run at his 13th career Tour title this week.

Day carded eight birdies and zero bogeys en route to a round of eight-under 62 on Friday, launching him to the top of the leaderboard. He has a one-shot lead over three-time Travelers champ Bubba Watson and Kramer Hickok, who is still seeking his maiden Tour title.

Day will tee off in Saturday’s final pairing alongside Watson at 2 p.m. ET, while Hickok will play with Russell Henley at 1:50 p.m. ET.

Another resurgent player to keep an eye on? Justin Rose, whose second-round score of seven-under 63 has him three shots off the lead in T4. Rose will play the third round with K.H. Lee at 1:30 p.m. ET.

Check out complete third round tee times for the 2021 Travelers Championship below.

How to bet on the Travelers Championship — risk-free!