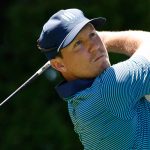 Kramer Hickok is a co-leader at the Travelers Championship after firing an opening-round 63.

The PGA Tour is in Connecticut this week, at TPC River Highlands. There are plenty of big names in the field, including Dustin Johnson, Brooks Koepka, Bryson DeChambeau and reigning PGA champion, Phil Mickelson. Here are four things you need to know after Thursday’s first round of the Travelers Championship in Cromwell, Conn.

After firing opening rounds of seven-under 63, Kramer Hickok and Satoshi Kodaira lead the field by one shot. Talor Gooch, at six under, is in solo third. Hickok is still seeking his maiden PGA Tour victory, while Kodaira has one win on his resume: the 2018 RBC Heritage.

How did the favorites play?

Dustin Johnson and Bryson DeChambeau came into the week as co-favorites, with 12/1 odds to win. As defending champion, expectations were high for DJ, but he had a somewhat lackluster opening round, posting a score of even-par 70. He did get some momentum going late, with back-to-back birdies on his final two holes. He’s currently T76 heading into the second round.

DeChambeau has a good track record at TPC River Highlands, with three top nine finishes in his last three appearances, but he too has a bit of work to do on Friday to get in the mix after a first-round 69 (1-under).

Phil Mickelson also fired a round of one under par on Thursday, but his day included some significant fireworks with the flatstick. Phil drained over 100 feet of putts over the course of two holes, including this 63-foot bomb for birdie:

What about the other big names?

Three-time Travelers champion Bubba Watson is currently T9 after an opening round of 66 (-4); Brooks Koepka, Patrick Reed, Adam Scott and Jason Day, Rickie Fowler are all one-under, and Justin Rose is even par.