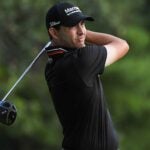 Patrick Cantlay is the man to beat at the 2021 Tour Championship.

The 2021 Tour Championship, the finale of the FedEx Cup Playoffs, kicks off Thursday at East Lake. You can find full Round 1 tee times for the tournament at the bottom of this post.

Notable pairings for Tour Championship Round 1

As players get ready to start the first round of the season’s final tournament, Patrick Cantlay is the man to beat. The 29-year-old rose to No. 4 in the Official World Golf Ranking, and No. 1 in the FedEx Cup standings, following his dramatic playoff victory over Bryson DeChambeau at last week’s BMW Championship.

Thanks to his top ranking, Cantlay will begin the Tour Championship at 10 under with a two-shot advantage over Tony Finau in the No. 2 position. Players will tee off based on their FedEx Cup position at East Lake. Cantlay and Finau will tee off in the final pairing at 2 p.m. ET Thursday.

The penultimate pairing might draw the most interest from golf fans. No. 3 DeChambeau, who will start at seven under, and No. 4 Jon Rahm, who starts at six under, will play together on Thursday, teeing off at 1:50 p.m.

Check out complete first-round tee times for the 2021 Tour Championship below.