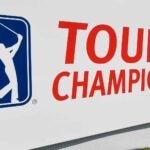 The 2021 Tour Championship begins Thursday at East Lake in Atlanta.

The FedEx Cup Playoffs come to an end this week with the 2021 Tour Championship at East Lake, where a whopping $60 million is on the line. Here’s everything you need to know to watch the tournament.

It all comes down to this. After a lengthy season that began last fall and two exciting playoff events, we will finally crown a new FedEx Cup champion this week at the Tour Championship. Waiting at East Lake are the 30 top players in the FedEx Cup standings, who have all survived numerous ups and downs to get here. They will be fighting for their share of the enormous prize pool, with the winner taking home $15 million to go along with the trophy.

But not everyone is starting on a level playing field. Patrick Cantlay, last week’s BMW champion and the current FedEx Cup leader, will begin Thursday’s opening round at 10 under. Tony Finau, who is No. 2 in the rankings, will start two behind Cantlay at eight under. The players that occupy the bottom five positions in the rankings, a group that includes Masters champions Patrick Reed and Sergio Garcia, will start at even par.

Players are given tee times and pairings for Round 1 based on their ranking, with Cantlay and Finau occupying the final pairing. They’ll tee off last at 2 p.m. ET, but the pair proceeding them on the tee will get a lot of attention: Bryson DeChambeau and Jon Rahm, Nos. 3 and 4 in the standings. DeChambeau will start the tournament at seven under, while Rahm will start four shots behind Cantlay at six under.

You can find the full list of tee times for Thursday’s first round below, along with complete information about streaming the 2021 Tour Championship online or watching the action on TV.

You can watch the 2021 Tour Championship on Golf Channel and NBC. Golf Channel will air the first two rounds on Thursday and Friday and provide early round coverage on the weekend. NBC takes over for the third and final rounds on Saturday and Sunday evenings. Check out the full TV schedule below.

You can stream the 2021 Tour Championship online in various ways. You can watch the Golf Channel coverage at golfchannel.com/watch and the NBC broadcasts at NBC.com by logging in with your cable credentials. Another way to catch the action is with PGA Tour Live, which also includes featured group coverage, though you’ll need a subscription to access the stream.

In addition, you can stream NBC’s Saturday and Sunday broadcasts on Peacock, NBCUniversal’s streaming service.

SIGN UP FOR PEACOCK PREMIUM TO WATCH THE TOUR CHAMPIONSHIP, THEN ENJOY EVERYTHING THE PLATFORM PROVIDES