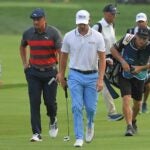 Patrick Cantlay outlasted Bryson DeChambeau in a playoff to win the BMW Championship.

Patrick Cantlay drained countless big putts during the final round of the BMW Championship on Sunday, culminating in an epic playoff victory over Bryson DeChambeau.

After the win, which ended on the sixth playoff hole, the 29-year-old Cantlay was asked about his putter, his perseverance and more. He was also asked about a comment DeChambeau made that was picked up on the telecast.

DeChambeau, playing in the final pairing with Cantlay, was leading by one through 13 holes. As DeChambeau lined up to play his approach into the par-4 14th green, he stopped — apparently bothered by something — and backed off his ball. He then said, “Patrick, can you stop walking?”

Cantlay, who had already hit his approach and was heading toward the green, did as requested, and DeChambeau hit his second shot.

In his winner’s press conference, Cantlay was asked about that situation and if something was going on between the two.

“He just wanted me to stop walking,” Cantlay said. “We had just been told by the rules officials to kind of speed up, and I’m not always the fastest walker, so I was trying to get ahead and do my part. No big deal; that stuff kind of happens every once in a while out here.”

Cantlay, when he reached the green on the 14th, drained his birdie putt to tie DeChambeau, and it was one of the many gritty putts he made through the course of the round and playoff. (DeChambeau declined to speak to the media afterwards.)

Cantlay eventually won the marathon playoff by making a 17-footer for birdie.

“[DeChambeau] just said, congrats, nice playing, and I said the same,” Cantlay said. “He played great all week. We traded blows pretty much all day.”