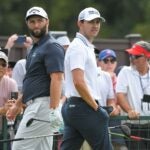 Patrick Cantlay and Jon Rahm are pulling away from the field at the 2021 Tour Championship.

Only two rounds remain at the 2021 Tour Championship, with Saturday’s third round setting up to be one for the memory books. You can check out the complete Round 3 tee times at the bottom of this post.

Patrick Cantlay maintained his lead, firing a second round of four-under 66 on Friday. Cantlay is now 17 under overall. But things are getting tighter in East Lake, as Jon Rahm is only one shot back after a second-straight 65. It’s looking like Saturday will be a horse race between the two players, as Bryson DeChambeau is five shots behind Rahm at 11 under overall.

Cantlay and Rahm will play in Saturday’s final pairing at 3:05 p.m. ET. DeChambeau and Thomas will tee off in the penultimate pairing at 2:55 p.m. ET, with Tony Finau and Kevin Na just before them at 2:45 p.m. ET.

You can browse the full list of third round tee times for the 2021 Tour Championship below.