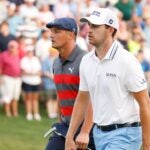 Patrick Cantlay and Bryson DeChambeau had an epic showdown at the BMW Championship.

It’s possible that you, dear reader, could be a golf fan and not actually know what Patrick Cantlay’s voice sounds like.

Sure, you’ve seen him on television broadcasts. The dude is always in contention, after all. You’ve probably even seen him interviewed. But Cantlay is not typically verbose. He does not seek out attention. Instead, he’s content to let his results speak for themselves, and that’s it.

Until Wednesday morning, that is.

Call it the perfect storm. Cantlay was coming off a win. He was riding high. And he’d just had a front-row seat to the hottest topic in golf: Bryson DeChambeau and his treatment at the hands of the BMW Championship fans.

There’s backstory here about why exactly DeChambeau is constantly peppered with cries of “Brooksy,” which you can review here. And the latest chapter came when PGA Tour commissioner Jay Monahan confirmed that fans yelling “Brooksy” could be ejected from tournaments going forward. But the court of public opinion isn’t so simple. Whether fans “like” DeChambeau — or feel sympathy for him — is a complex discussion. And when Cantlay was asked if he felt sympathy himself, well, he had quite the response stored up. With limited interruption, I present Patrick Cantlay, followed by my own thoughts on the matter:

“I think it’s a tough situation. I think, naturally, of course there is some sympathy because you don’t want to see anybody have a bunch of people be against them or even be heckled. I think anybody that watches sports and sees someone being heckled, they don’t like that inherently because if you imagine yourself as that person, it wouldn’t feel good.

“I think, unfortunately, it might be a symptom of a larger problem, which is social-media driven and which is potentially Player Impact Program derived. I think when you have people that go for attention-seeking maneuvers, you leave yourself potentially open to having the wrong type of attention, and I think maybe that’s where we’re at it and it may be a symptom of going for too much attention.

“But it can be awesome too, because if you succeed and you act perfect all the time and you do the perfect things all the time, and then you also go for the right attention-seeking moves, you get like, double bonus points because everyone loves you and you’re on the perfect side of it. I think it’s just a very live-by-the-sword, die-by-the-sword type of deal.

“And when you leave it to a jury, you don’t know what’s going to happen. It’s hard to get all 12 people on a jury on your side. And if you’re playing professional golf on the stage that you’re playing on, and 98 percent of the people are pulling for you and there are 10,000 people on the green, I don’t know, what does that leave, 20 people that don’t like you, even if 98 percent of the people like you? And if those 20 people have had enough to drink or feel emboldened enough to say something because they want to impress the girl they’re standing next to, then, yeah, like, you’re in trouble. People are going to say bad things.

“Golf, unfortunately, doesn’t and probably shouldn’t tolerate that. I think there’s a respect level in golf and there’s intimacy that the fans can get so, so close to you, and you’re also all by yourself, and you don’t have the armor of putting on Yankee pinstripes, and you don’t have the armor of having, knowing that if you’re on the Yankees and people hate you and you’re playing in Boston, you can tolerate it for three hours in right field. But you only tolerate it because you know next week or on Friday you’re going to show up and you’re going to be in Yankee Stadium and no matter what you do, even if you fall on your face, you’re going to have the pinstripe armor on and people are going to love you.

“So golf is different in that respect, that if you only have 2 percent of the people that are very against you because you’re polarizing and because you’re attention-seeking, then you’re kind of dead because those people are going to be loud, and they’re going to want to say something to get under your skin.

“And I think golf shouldn’t let that happen. I think the Masters is a great example of a place that doesn’t let that happen, and it’s the greatest place to watch and play professional golf because of the atmosphere they create. I think if you look at the history of the game and you look at the respect that underlies the entirety of the history of the game, we shouldn’t tolerate it, and we shouldn’t celebrate that. We should celebrate the fan that is respectful and pulls for their side.

“So it’s a tough situation. It’s a tough topic, but that would be my take on it and I’m sure it’s not perfect, but after thinking about it a little bit, it’s the best I can come up with.”

Wow! If you’ve made it this far, my five immediate takeaways:

3. Cantlay is no fan of social media.

At last check, Cantlay didn’t have Instagram on his phone. He never tweets. And it’s pretty clear from these comments (and his activity on those accounts) that he doesn’t think much of the world’s Great Attention Race.

4. He’s not worried about PIP.

In a follow-up question, Cantlay was asked about his PIP (Player Impact Program) ranking and answered frankly:

“I got to be honest, I doubt I’m doing very well in that category,” he said. Then he added that if he won any portion of the $40 million PIP prize, he’d give it back to the fans in some form.

“I won’t take any of the PIP money. I think it’s kind of ridiculous and I think it’s, when I said there’s a symptom of a larger problem, I think that’s exactly what I’m talking about.”

Cantlay came in grinning and shooting from the hip, filled with jokes and takes:

He explained that he’s never had a good nickname before the latest “Patty Ice.”

“I’ve had people tell me that it’s hard to come up with a nickname for me,” he said.

He made it pretty clear what he thinks of the Tour Championship.

He stuck up for his buddy Xander Schauffele’s 72-hole low score at East Lake last year.

“I think the fact that Xander didn’t get a tournament win for beating the field by two or three shots is absolutely criminal,” he said.

And when he was asked if he’d scripted his remarks ahead of time, he had a mic-drop response.

“I’m looking around here. I don’t see any prompters,” he said.

And thus the Cantlay Era began.