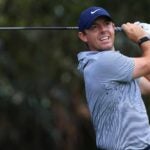 Rory McIlroy got off to a hot start at the 2021 Tour Championship.

The action is just starting to heat up at the 2021 Tour Championship, with one round out of the way, and Round 2 coming up fast on Friday. You can check out the complete second-round tee times at the bottom of this post.

It’s hard not to have good storylines at the Tour Championship when the field is made up of the best 30 players on Tour, and Thursday’s round at East Lake was not short of them. Pre-tournament FedEx Cup leader Patrick Cantlay began the day at 10 under, and he’s holding strong so far. Canltay shot a three-under 67 to move to 13 under for the tournament.

He’ll once again occupy the final pairing on Friday, but for the second round he’ll have a new playing partner. World No. 1 Jon Rahm is hot on his tail after firing a five-under 65 in Round 1 to move into second place at 11 under. Cantlay and Rahm will tee off on Friday at 2:05 p.m. ET.

Harris English made a big move up the leaderboard with a 66 on Thursday. That moved him to eight under, tied with Bryson DeChambeau, who shot 69, for third. English and DeChambeau will be paired together in the penultimate group for Round 2, starting at 1:55 p.m. ET.

You can browse the full list of second round tee times for the 2021 Tour Championship below.