2021 Tour Championship live coverage: How to watch Round 2 on Friday 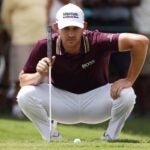 Patrick Cantlay maintained his FedEx Cup lead in Round 1 at the 2021 Tour Championship.

The 2021 Tour Championship continues on Friday at East Lake, where the best players in the game are jostling for position. Here’s what you need to know to watch the second-round action on TV or online.

Patrick Cantlay is one step closer to being $15 million richer. The pre-tournament FedEx Cup leader showed little nerves on his way to an opening-round 67 on Thursday at East Lake. That moved him to 13 under, but his lead did not grow, despite playing partner Tony Finau’s struggles. World No. 1 Jon Rahm charged up the leaderboard with a 65, moving into second place at 11 under.

But Rahm isn’t the only challenger Cantlay has to worry about. Bryson DeChambeau had an up-and-down round that left him tied with Harris English for third place at eight under.

Below you will find everything you need to watch the second round of the 2021 Tour Championship on Friday.

How to watch Tour Championship Round 2 on TV

Golf Channel will air the second round of the 2021 Tour Championship with five hours of coverage from 1-6 p.m. ET on Friday.

How to stream Tour Championship Round 2 online