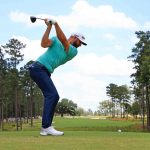 Dustin Johnson is two shots off the lead at the Palmetto Championship's halfway point.

The 2021 Palmetto Championship at Congaree is already at the halfway point. You can find full third round tee times at the bottom of this post.

Notable groupings for Palmetto Championship Round 3

If it wasn’t for a costly double bogey on his final hole, Dustin Johnson would be tied for the lead heading into the third round of the Palmetto Championship in his home state of South Carolina. Instead, the World No. 1 is nine-under and two shots behind leader Chesson Hadley, who is 11-under overall.

Johnson hasn’t won on Tour since his 2020 Masters victory, but a title this week would mark the 25th of his career. By contrast, Hadley has only one win on his Tour resume, the 2014 Puerto Rico Open, and missed the cut in his last five events.

Teeing off just ahead of Johnson and Hadley will be the day’s penultimate pairing, Tain Lee at Harris English, who trail Hadley’s lead by four and five shots, respectively.

Check out complete third round tee times for the 2021 Palmetto Championship below.