‘It wasn’t glamorous’: Inside Dustin Johnson’s quest to fix his wedge game 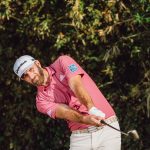 DJ's wedge play has made him one of the best golfers on the planet.

Dustin Johnson has always been a great golfer. He just wasn’t “legendary.” At least not yet. All the difficult stuff — from driving a ball 350 yards to dunking a basketball — Johnson could do with ease. What failed him at the very highest level in the early parts of his professional career were the tasks that couldn’t be solved with innate talent: getting wedge shots close.

This was a problem, because when you hit the ball as far as Johnson, you end up with a lot of wedges in your hand. And if you’re not scoring with those clubs, you’re neutralizing your biggest strength with self-inflicted errors.

So Johnson got serious. He bought a Trackman, and with his coach, Top 100 Teacher Claude Harmon III, went to work. At the range, Harmon would call out yardages to Johnson, who’d then try to hit them on the number. They practiced it for hours.

Precise distance control is the hallmark of any good wedge game. Most golfers tackle distance control in one of two ways: 1) they use the Dave Pelz–designed clock system, in which golfers intentionally shorten or lengthen their backswing to control their distances, or 2) they rely exclusively on feel. Johnson opts for something in between.

“I don’t worry too much about how each swing looks; it’s more about how they feel,” he says. “Everybody is going to be different.”

Just because wedges usually entail short shots, it doesn’t mean they should be “soft” shots. When Johnson falls into that trap, he starts decelerating and his contact suffers.

Fact: When it comes to your wedges, “the strike is everything,” Johnson says. “Inconsistent strikes make it impossible to control distance.”

His recipe is simple: Set your weight slightly forward at setup and make a fast rotation through the ball with your upper body. Those two things will help you control the spin and send the ball on an aggressive, lower flight.

“Amateurs want to hit wedges high, but if you watch the best wedge players, they all hit them low,” Johnson says. “That’s what I’m trying to do. I want to make an aggressive move and flight it low and go pin hunting.”

Want to really dial in your wedges? Schedule a fitting with the experts at 8AM Golf affiliate True Spec Golf.

Get your wedges dialed in This putting tweak has Phil Mickelson channeling his younger self