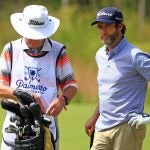 Mark Hensby and his caddie on Thursday on the 11th hole at Congaree Golf Club.

And because of the little-used rule that came into play, his first-round 74 on Thursday at the Palmetto Championship ballooned to an 84.

The infraction began on the 633-yard, par-5 4th at Congaree Golf Club. There, Hensby hit his third shot into the water to the right of the green, and he dropped, pitched to 5 feet and made his putt. He’d play four more holes. Then, according to pgatour.com, Hensby looked at his Titleist ProV1. Or, more specifically, the dot on it.

“I asked my caddie, ‘Hey what’s this dot on the ball? I’ve never noticed this before; did they do something with the new ProV1?’” Hensby told the website. “And he didn’t know, so I asked my playing partners, and they were like, ‘That’s a low spin ball.’ Now I don’t use this ball, so there was a lot of confusion where it came from — none of my others had the dot — but we knew I had played the wrong ball.”

It was Pat Perez’s.

According to pgatour.com, Hensby called over senior tournament referee Mike Peterson, and it was determined that he had picked up one of Perez’s balls on the practice green before the round — and that was the ball he dropped on the 4th hole. That’s a no-no. Per Model Local Rule G-4, or the “one-ball rule,” players are assessed a two-stroke penalty for each hole they play a ball that is not the same brand and model that they start a round with. (Prior to 2019, the maximum penalty a player could receive was four strokes.)

“For Mark to call that on himself speaks volumes about him and the integrity of the game,” PGA Tour senior tournament director Ken Tackett told pgatour.com.

“If you look at both balls, it’s hard to know the difference,” Hensley told pgatour.com. “It’s not like one is black and one is red. They’re both black, but one has a small dot on it and one doesn’t. Unfortunately, I didn’t notice that. I’m glad he didn’t use mine.”

5 tips for having a good pre-shot routine, according to a Top 100 Teacher