2021 Palmetto Championship live coverage: How to watch Saturday’s third round 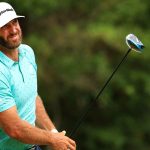 Dustin Johnson is two shots back at the Palmetto Championship.

The 2021 Palmetto Championship continues on Saturday with the third round at Congaree. Here’s what you need to know to watch all of Saturday’s action.

South Carolina native Dustin Johnson was the betting favorite heading into the week, and at the tournament’s halfway point, he’s right in the mix. Despite making a double bogey on his final hole, Johnson is currently in solo second, only two shots behind leader Chesson Hadley.

Johnson is seeking his 25th Tour victory this week, and his first win since claiming the November Masters title last year. Hadley has only won once on Tour — the 2014 Puerto Rico Open, and came into the Palmetto Championship having missed the cut in his last five tournaments.

It’s sure to be an entertaining showdown between the two players in Saturday’s third round. Johnson and Hadley will tee off in the tournament’s final pairing at 1:50 p.m. ET.

How to watch Palmetto Championship Round 3 on TV

Golf Channel will air the early action for the third round of the 2021 Palmetto Championship with two hours of coverage from 1-3 p.m. ET on Saturday, with CBS taking over from 3-6 p.m. ET.

How to stream Palmetto Championship Round 3 online

You can stream the third round Golf Channel TV coverage of the 2021 Palmetto Championship on golfchannel.com. Fans can also view Featured Group coverage of the second round all day Saturday via PGA Tour Live with a subscription.