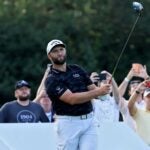 World No. 1 Jon Rahm is the heavy tournament favorite at the Fortinet Championship.

The (short) wait is over, and now the new PGA Tour season is set to begin on Thursday at the 2021 Fortinet Championship. Here’s what you need to know to watch the first-round action on TV or online.

With the first few tournaments of the season coming hot on the tails of the FedEx Cup Playoffs, you don’t always expect stellar fields to assemble as star players recover from the previous season on Tour. But that’s far from the case this week at Silverado Resort & Spa in Napa, California.

In fact, three of the four major winners from 2021 will tee it up this week, including the reigning U.S. Open champion and top-ranked player in the world, Jon Rahm. Rahm just missed out on winning the FedEx Cup and its $15 million first prize, finishing one shot behind Patrick Cantlay. He also will lead the European Ryder Cup team at the postponed biennial event that begins next week at Whistling Straits. But first he’ll try to capture his seventh career PGA Tour title.

Rahm will be joined in Napa by 2021 PGA Champion Phil Mickelson and 2021 Masters winner Hideki Matsuyama, both of whom are ready to make the new season as memorable as the last.

Below you will find everything you need to watch the first round of the 2021 Fortinet Championship on Thursday.

How to watch Fortinet Championship Round 1 on TV

Golf Channel will carry the first round of the 2021 Fortinet Championship with three hours of coverage from 6-9 p.m. ET on Thursday.

How to stream Fortinet Championship Round 1 online

You can stream the first round Golf Channel TV coverage of the Fortinet Championship on golfchannel.com. Fans can also view Featured Group coverage of the opening round all day Thursday via PGA Tour Live with a subscription.

How to bet on the Fortinet Championship