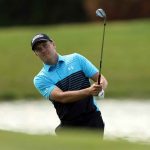 TPC Craig Ranch didn’t put up much of a fight on Thursday, as the field demolished the course with an avalanche of red numbers. Will we bear witness to a new scoring record over the next three rounds? Here are three things you need to know after Thursday’s first round of the AT&T Byron Nelson in McKinney, Texas.

Jordan Spieth’s PGA Tour resurgence continued on Thursday, as he fired a bogey-free round that included seven birdies and a show-stopping eagle on his closing hole.

Spieth hasn’t finished worse than T9 in his last three tournaments — and that includes a win at the Valero Texas Open. He also has three other top-4 finishes on his resume since February. A win this week would mark the 13th of his career.

Spaun was also bogey-free on Thursday, and is seeking his maiden PGA Tour victory this week.

If you want to stick around for the weekend in Texas, it looks like you’ll have to go low — really low. Of the 155 players in the field, over 140 fired rounds in red numbers.

Big names in the hunt

Chasing Spieth and Spaun is a bevy of big-names who will be looking to put some pressure on the leaders in Round 2. Among them: Charl Schwartzel, Luke Donald and Sergio Garcia, all at seven-under; Brandt Snedeker and Padraig Harrington, six-under; and Scottie Scheffler, Rickie Fowler and Matt Kuchar at five-under. Jon Rahm is also lurking at four-under.