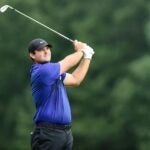 Patrick Reed shot a two-under 68 Friday at the 2020 Wyndham Championship.

After two rounds of play at Sedgefield Country Club, the pros who made the cut are set for Saturday’s third round at the 2020 Wyndham Championship. You can find full third round tee times at the bottom of this post.

Notable groupings for 2020 Wyndham Championship Round 3

Tournament organizers are expecting storms to roll through the course in the afternoon on Saturday. As a result, third round tee times have been pushed forward into the morning. In addition, players will play in threesomes off both the 1st and 10th tees in order to get the round finished before the bad weather begins. Saturday tee times will fall from 7-9 a.m. ET.

One player that will have a tee time on the later side on Saturday is Patrick Reed. The 2018 Masters champion backed up his opening-round 65 with a 68 on Friday to improve to seven under. Reed tees off for Round 3 at 8:10 a.m. ET alongside Tyler Duncan and Peter Malnati.

Reed’s performance left him in good position, but not as good as three other players who played early on Friday. Si Woo Kim and Talor Gooch both shot 65s on Friday to reach 10 under. Tom Hoge (68) also reached double digits, leaving the three of them tied for the early lead. Billy Horschel later turned it into a four-way tie in the afternoon. Kim, Hoge, and Gooch will play together in the final grouping on Saturday, beginning at 9:00 a.m. ET, and Horschel will tee off 10 minutes earlier with Harris English and 2019 Open champion Shane Lowry

Speaking of major winners, two players with multiple major wins on their resumes found very different results through two rounds. Jordan Spieth battled back with a strong round on Friday to make the cut on the number. Brooks Koepka, on the other hand, failed to improve enough to make the cut and will be heading home early.

Check out the complete third round tee times for the 2020 Wyndham Championship below.