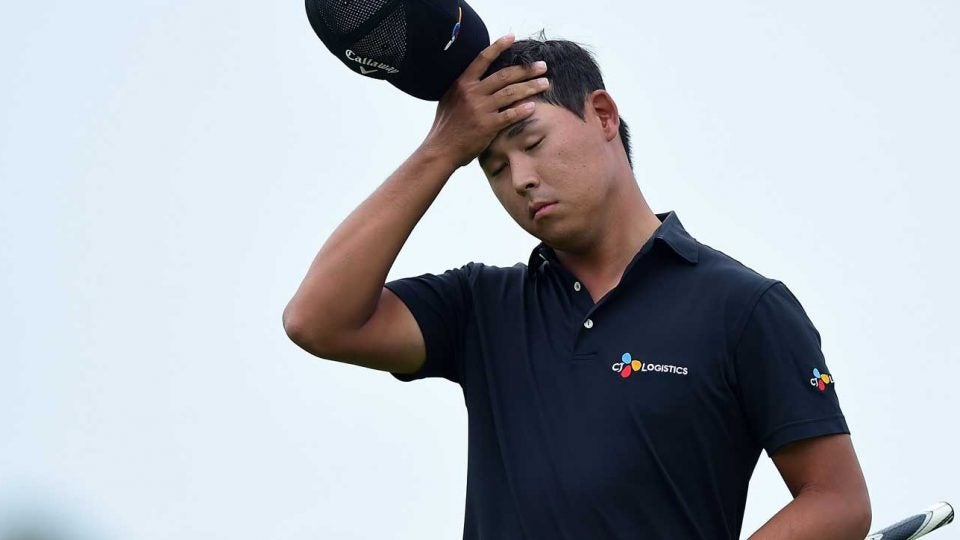 Si Woo Kim is the leading contender for bad break of the year.
Getty Images

Over the course of a PGA Tour season, players are going to find plenty of bad breaks and plenty of good ones. But in the moment of that bad break, boy can it feel unfair. Now that the 2019 regular season is complete, we have an early leader for bad break of the year, thanks to recent podcast guest Martin Trainer.

Trainer joined the GOLF.com Podcast this week to talk about his rookie season, winning the Puerto Rico Open and the biggest myths about the PGA Tour. He also clarified his favorite story from the season, which was likely the unluckiest moment of Si Woo Kim’s.

Trainer and Kim were grouped together for the first two rounds at the Arnold Palmer Invitational in March. Off the tee, they hit the ball similar distance (Trainer averaged 6 yards longer in 2019). But on the 18th hole at Bay Hill during that first round, Kim’s perfect tee shot became imperfect.

The unluckiest shot of 2019 might belong to Si Woo Kim according to @martin__trainer ? Link in bio for more from Trainer’s guest appearance on the latest @GOLF_com podcast.

We’ll leave the storytelling up to Trainer:

“[Si Woo] just pipes this drive, and he’s just so happy. We just look up there and it takes a big bounce. Huh? That’s weird. That took a huge hop. He’s going to be way down there. He’s going to have like a pitching wedge in. This is fantastic. Little do we know, that big bounce came from him hitting the Robert Gamez memorial hole-out plate! It scoots all the way down into the water.

“I also hit a good drive down the middle, I hit it a little further than Si Woo, so I’m like ‘Oh, there’s one ball in the fairway. Where’s the other ball? Did I go all the way through? It’s a little downwind, but it’s like 350 yards or something. There’s no way I got all the way down there. I see my ball in the fairway. I’m like ‘Oh, thank goodness, but where’s Si Woo at? Is he in a sprinkler?’ I was looking around in the sprinklers. Then I turn around and look at him. He’s just standing on the edge of the lake, staring into the lake, disappointed. Then he pulls out his yardage book and throws it into the lake! Then we proceed to finish the round. That was an all-time moment.

“The best part was that his caddie proceeded to rip into Robert Gamez and his career and how undeserving he is to have a plate out there and how it’s total B.S. that there’s a stupid plate commemorating his career.”

Yep, that’s basically as unlucky as it gets. What might be most impressive is that Kim started that day on the 10th hole, so his discarding of his yardage book left him without a book for the remaining 27 holes before he’d miss the cut. According to Shotlink, Kim’s drive traveled 344 yards into the lake — Trainer’s shot ended up at 318 yards, safely on the short grass — which is much farther than his average of 293 yards off the tee. You can even check out Kim’s 12 tee shots on the 18th hole in his career below. None of them even came close to the lake.

For those who don’t know how Robert Gamez came to have a plaque in his name at Bay Hill, this video should suffice.

Check out that story and others from Trainer’s first season on Tour in the podcast below. Subscribe to the GOLF.com Podcast on iTunes by clicking here.