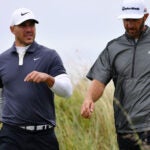 Dustin Johnson and Brooks Koepka playing a practice round at Royal Portrush in 2019.

For the first few years of his PGA Tour career, one of the most well-known things about Brooks Koepka was that he was good friends with Dustin Johnson. That was four majors ago, of course. A world No. 1 ranking ago, too. Plenty has changed — and now, Koepka says the entire relationship was never quite what we thought.

After his opening round of 2-over 72 at the Wyndham Championship on Thursday, Koepka was asked if people have made too much of his friendship with Johnson.

The “Joey” he refers to is Joey Diovisalvi, more commonly known as “Joey D” the Jupiter, Fla.-based trainer who gained fame in the golf world for his work with Koepka and Johnson. The two trained together with Joey D nearly every day and were connected in television segments, on magazine covers, at press conferences.

It was a convenient storyline, but also a fascinating one: Two of the game’s strongest, most athletic stars were also training partners and good buddies? When the two played in the final group at the 2018 U.S. Open at Shinnecock, the tale seemed too good to be true.

But in recent interviews, Koepka has suggested it was too good to be true. He emphasized that he has a group of close friends, and that Johnson isn’t among them.

First came a Golfweek interview (well worth your time!) in which Eamon Lynch asked Koepka about his best friend on Tour. Until recently, most golfers would have thought it would be Johnson, no questions asked. But here’s what Koepka said:

“I’m not close with any of the guys out here. We are friends, but at the same time I’ve got enough friends. I see these guys 22 weeks of the year. When I go home I don’t need to see them for another 30 weeks, you know?”

The comments recirculated when Koepka took a shot at Johnson’s major championship record before the final round of the PGA, pointing out that he himself has proven to be a much better closer. Those remarks caught the attention of the golf world, including Rory McIlroy, who said he was “surprised” and would have tackled it differently.

Wednesday before the Wyndham, Lynch published another interview with Koepka, which included this exchange:

Lynch: Have you communicated with DJ about it since Saturday night?

Koepka: No, I haven’t spoken to any players who played in that field since then about any of my comments.

Lynch: Do you plan to reach out to DJ specifically?

Koepka: That’s not something I’m planning on doing.

For context, it’s not totally fair to say that the friendship was always just a media construction. Jim Furyk called the two “like brothers” after a spat at the 2018 Ryder Cup. Joey D talked about their friendship and connection in countless interviews. I myself asked Dustin Johnson if the friendship was overblown when he came on the Drop Zone podcast.

“No, we hang out a good bit,” Johnson said. “Especially when we’re at home, we train together all the time … We’re good buddies. We hang out together a bunch.”

And then there was Koepka himself, shortly after that Ryder Cup, who said this: “He’s one of my best friends. I love the kid to death.”

Now? Not so much. I’m certainly not here to speculate why, but it’s notable that there’s some sort of rift between two of golf’s top dogs. Koepka implied that without the shared gym connection, the two aren’t as close as they’re portrayed.

“I don’t know what you guys — you guys make your own stories, so I have no idea what you all do,” he told reporters.

Worse yet? Koepka says theirs isn’t the only famous golf friendship that gets too much hype.