BMW Championship live coverage: How to watch the final round Sunday 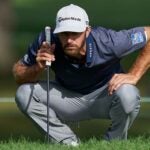 Dustin Johnson leads heading into the final round of play on Sunday at the BMW. Can he become a repeat PGA Tour winner?

The 2020 BMW Championship finishes up on Sunday, August 30, with the final round at Olympia Fields CC. Here’s what you need to know to watch the action on Sunday.

A week after blowing away the field en route to a 30 under victory at the Northern Trust, Dustin Johnson is again in the 54-hole lead at the BMW Championship. Despite the tournament playing under drastically different conditions at Olympia Fields (a former U.S. Open host), Johnson managed to leap into the lead on Saturday with his second straight 1-under 69.

DJ is tied atop the leaderboard with Hideki Matsuyama, and both golfers hold a two-stroke lead over the remainder of the field in the second event of the FedEx Cup Playoffs. Joaquin Niemann, Adam Scott, Rory McIlroy and Jon Rahm highlight the plethora of golfers sitting near the two leaders at a couple of strokes over-par.

In short, with U.S. Open-like conditions and a loaded leaderboard, the stage is set for a rollicking Sunday at the BMW Championship, here’s everything you need to know to watch.

How to watch BMW Championship Round 4 on TV

Golf Channel will handle the early stretch of the action from the BMW Championship, going on-air from Olympia Fields at 1:00 p.m. ET and continuing until 3:00 p.m. ET, when the coverage moves to NBC for the remainder of the tournament.

How to stream BMW Championship round 4 online

You can stream the final round of the BMW Championship online by using your cable subscription login credentials on golfchannel.com or NBC Sports Gold. Fans can also view featured group coverage of the final round Sunday on PGA Tour Live, though you’ll need a subscription to access the stream.