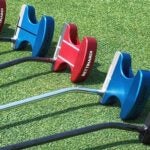 Bettinardi's Hexperimental putter was launched at Olympia Fields, site of the 2020 BMW Championship.

It’s not often that a new product has a connection to the course, but there’s a reason why Bettinardi waited until this week to launch its new Hexperimental High MOI Prototype at Olympia Fields Country Club, site of the 2020 BMW Championship.

The putter’s eccentric profile has been around for almost two decades, dating back to Jim Furyk’s win at the 2003 U.S. Open with a Bettinardi “Baby Ben” mallet. Furyk’s connection to Baby Ben will go down as one of the wildest tales in the history of the industry and further highlights how quickly a product can go from a relative unknown to the talk of the industry overnight.

Coming off three consecutive top-10 finishes entering the 2003 U.S. Open, Furyk planned to use a Hog prototype putter at Olympia Fields — until the USGA intervened.

Just days before the first round, Furyk was informed by golf’s governing body that the putter had been deemed illegal. A Golfweek report from 2003 noted Dave Billings, founder and CEO of Dogleg Right, maker of the Hog, had failed to submit the putter Furyk had been using to the USGA prior to showing it to Tour players. The USGA deemed the mallet to be non-conforming — due to the “plain in shape” rule” — because the “tongue on the crown of the putter was not connected to the sole.”

Without a backup option, Furyk approached Bob Bettinardi, founder of Bettinardi Golf, to see if he had a last-minute solution.

“Jim had heard my business was only 25 to 30 minutes away from Olympia Fields,” Bettinardi recalled on GOLF’s Fully Equipped podcast. “He came up to me around 11 [a.m.] that day and said, ‘Hey, I just got notified by the USGA that the putter I’m using now, which was another brand, was deemed illegal.’ He said he needed to go get a putter now.”

Furyk and his father loaded up in Bettinardi’s car and made the trip to his facility, where Furyk proceeded to test different putters into the evening, before finally settling on the high-MOI Baby Ben mallet.

“It was a wide-body mallet [made from] aluminum — it was actually probably one of the first high-MOI putters ever made,” Bettinardi said.

Furyk’s win would go on to put Baby Ben, and Bettinardi, on the map. At the time Furyk used the putter, Bettinardi had recently aligned with the Ben Hogan Golf Company (2003-2005) to produce putters that were stamped “Hogan Milled by Bettinardi.” Two years after Furyk’s win, Bettinardi linked up with Mizuno (2005-2008) before eventually setting off on his own, in 2009, to create Bettinardi Golf.

The Hexperimental prototype pays tribute to the Baby Ben with a refined profile that utilizes new materials, including a 303 stainless steel face featuring the company’s F.I.T. (Feel Impact Technology) for a softer feel at impact. A spud neck (slight toe hang) and triple sightline package are also part of the design.

It’s unclear if anyone in the field is using the putter at the BMW, but based on Furyk’s last go-around at Olympia Fields with a similar profile, it wouldn’t be a bad idea.

Will Zalatoris on arm-lock putting: There's 1 way the USGA would reconsider their stance

Pros are flocking to this club at the U.S. Open — should you put one in play?

How to buy the camo Nike hoodie Rory McIlroy was spotted wearing at the U.S. Open