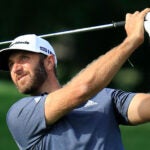 Dustin Johnson hits a shot on the 18th hole at Olympia Fields Golf Club on Saturday.

The co-leader was 22-under through three rounds last week. The co-leader is 1-under through three rounds this week. The low scores change. The low player stays the same. Here are three things you should know after Saturday’s third round of the BMW Championship at Olympia Fields Golf Club just outside of Chicago, the second event in the FedEx Cup playoffs.

Last week, Dustin Johnson shot 4-under 67, 11-under 60 and 7-under 64 to lead the Northern Trust after three rounds. This week, he’s shot 1-over 71, 1-under 69 and 1-under 69 to share a two-stroke lead with Hideki Matsuyama after three rounds. Johnson’s not as low on the scorecard as he was last week. The conditions are tougher. But he’s just as high on the leaderboard.

Johnson bogeyed the 1st hole on Saturday, then played the final 17 at 2-under on his way to the second straight 69.

“This golf course just demands different kinds of shots and pars,” Johnson of the difference between last week and this week. “It’s a completely different golf course, completely different conditions. It’s pretty easy to get into the mindset of 4-under is a good score. This is a pretty much a major championship venue, obviously, and the conditions, the way it’s set up, it’s playing just like a major.”

While Johnson bogeyed the first, Matsuyama eagled it, holing out from a greenside bunker. He played the final 17 at 1-over on his way to a 69.

“Great start and then just had to hang on,” Matsuyama said. “Just tried to do what I could to stay in, and I was happy with how it went.”

Several players are in contention

Eighteen players are five shots back of the lead or closer.

Three players – Adam Scott, Joaquin Niemann and Mackenzie Hughes – are at 1-over and two shots back. Six players – Rory McIlroy, who had a share of the second-round lead; Jon Rahm, who picked up his ball on the 5th green before marking it; Bubba Watson; Kevin Kisner; Brendon Todd; and Sebastian Munoz are at 2-over and three shots back.

Tiger Woods’ tournament is essentially over. His season is, too.

Woods entered the tournament in 57th place in the FedEx Cup standings and needed somewhere around a top five finish to advance to next week’s season-ending Tour Championship. He’s currently tied for 55th.