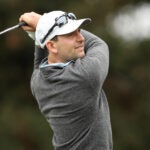 Martin Trainer held the lead on Friday at the Houston Open.

When oddsmakers released the numbers for this week’s Hewlett Packard Enterprise Houston Open, a few Tour stars served as the headliners. Sam Burns led the way at 16-1. Scottie Scheffler was 18-1. Cameron Smith and Sungjae Im were 20-1. Tony Finau was 25-1, and Brooks Koepka and Matthew Wolff were among those at 30-1.

Martin Trainer wasn’t exactly leading the conversation. In fact, he began the week at 2,000-1, per the site GolfOdds.

But through two rounds, Trainer is very literally leading the way. The 30-year-old Tour pro fired back-to-back rounds of five-under 65 to set the pace at 10-under par. Good news: We’ve got all the Martin Trainer facts you could ever need. Here are 10 of ’em.

Trainer was getting ready to play the 2018 season on PGA Tour Latinoamerica when he stopped through an open qualifier for the Korn Ferry Tour’s El Bosque Mexico Championship on the way. He played well enough to get into a three-for-one playoff. He emerged from the playoff. And then he won the tournament. In other words, Trainer is used to rising to the occasion.

2. His rise to the PGA Tour was particularly unique.

Suddenly Trainer had earned a promotion and had status on the Korn Ferry Tour. But he didn’t take immediate advantage; in the 13 starts after his win, he had nine missed cuts and just one finish inside the top 50. But then he won again at the Price Cutter Charity Championship, guaranteeing his ascent to the PGA Tour at the conclusion of the year. On the season, he posted three top-50 finishes, and two were victories.

Winning from nowhere is a theme for Trainer. He began the 2018-19 PGA Tour season with a rally to make the cut at the Safeway Open, making birdie on the final five holes to shoot 66. But he finished just T60 there, then missed four of his next six cuts before he played the 2019 Puerto Rico Open — and won that, too.

Good news for Trainer: That win in Puerto Rico locked up status for the rest of the season plus two additional years. That meant he was good through the 2021 season — but once Covid interrupted that season, the Tour extended the status for winners on Tour. As a result, Trainer has the rest of this season to lock up status for next year. Thus far, he’s made zero cuts in five starts, putting that much more pressure on a high finish in Houston.

You can’t be golf’s Ricky Bobby — first or last — without some highs and lows. We’ve documented the highs, but it’s been largely lows of late. Trainer made three of his next four cuts after the win in Puerto Rico. But after that, he made just two cuts in his next 37 starts, and one of those two came at the no-cut Tournament of Champions, where he finished 34th out of 34. Since the beginning of 2020, he has played on Sunday in just six events out of 41 starts. That’s where the 2,000-1 odds come from.

“Yeah, it is demoralizing when you keep missing cuts over and over again,” Trainer said after his second round. “On Tour obviously it’s tough to even compete and make a cut let alone, you know, get to the top of the leaderboard.”

Trainer has ranked fairly low in most of the PGA Tour’s ball-striking categories, but there’s one where he’s near the top: swing speed. This season, he’s averaging 123.05 mph with his driver, good for fifth on Tour. Last year, he was a shade under 122 mph, good for 11th on Tour. His speed has jumped from his first year on Tour, when he swung it 118.03, 37th on Tour. Maybe the results will follow the power.

Trainer was born in Marseilles, France, and speaks mostly French with his mother, Isabelle, who is from there. His father, Paul, is from California, was a terrific basketball player at UC-San Diego and wound up playing professional hoops in France, where he then settled for more than two decades.

8. He played with Steph Curry on the Korn Ferry Tour.

Remember when Steph Curry played at the Ellie Mae Classic? The second year he had quite the intriguing group: Curry, Trainer and Cameron Champ. Curry started hot with a first-round 71 before firing 86 on Day 2. He didn’t know at that point that he was playing with pros who would be PGA Tour winners within the next year.

In many ways, but notably this: He lives in San Francisco. Tour pros tend to clump in warm-weather enclaves like Jupiter, Fla., Sea Island, Ga. and Scottsdale, Ariz., but Trainer has settled in the heart of the tech world. He plays out of the Cal Club, where he has no problem scaring up a game — just perhaps not the same caliber of opponent as he might find at Medalist.

That’s right — Trainer hired me for a couple spot starts of caddying. And he’s a delightful guy! Our first week together came at the 2019 Valspar Championship (which I wrote about here) and the next at the 2020 Memorial Tournament. Both unfortunately ended in missed cuts, but I learned a boatload about the PGA Tour scene. It’s an enviable lifestyle, as long as you’re playing the way Trainer is this week.