Can this Monday qualifier, caddie and putting champion ride the hot streak in Minnesota? 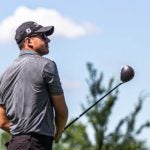 Aaron Crawford qualifier for the event with a Monday 63.

BLAINE, Minn. — Aaron Crawford was grinning ear to ear Tuesday afternoon, and could you blame him? He was waltzing around the practice green, prepping for the first PGA Tour start of his life.

That’s plenty reason alone, but Crawford was smiling because he had run into Martin Trainer, the Tour player for whom he normally caddies. “It’s good to see you this way,” Trainer said. “Yeah, I like this version a little better,” Crawford replied.

Crawford is in the field this week at the 3M Open after Monday qualifying at Victory Links Golf Course just two miles away. He made eight birdies and 115 feet of putts to shoot a 63 (where a 64 would have meant a playoff), and proceeded to send a witty text Trainer’s way: “You can carry your own bag this week!”

The skinny on Crawford is not just that he’s a very good player — that was obvious before Monday and feels even more obvious now — but rather that he’s Tour-ready with the flatstick.

“He’s one of the the best putters I’ve ever seen,” Trainer says.

If Crawford was a typical Monday qualifier, you’d just have to take Trainer at his word. But not with this looper. Crawford is a Major Series of Putting champion.

The Calgary, Alberta native has competed in more than a dozen MSOP competitions over the last three years, and cashed more than $40,000 in winnings. The lion’s share of it came at the 2018 Major Series of Putting  Stroke Play Championship, a 76-player, 6-round gauntlet of putting prowess. Crawford emerged from the pack during the final round — thanks to six-straight birdies (or one-putts) — and won by four, taking the $25,000 grand prize.

“I knew I was a good putter,” Crawford says. “But then that happened and I was like, ‘Okay, I obviously know what I’m doing here.’”

That’s why he’s been on Trainer’s bag to begin with. Crawford knows what he’s doing here, both making putts and reading them. “He reads every putt,” Trainer said of their typical arrangement. “I basically never hit a putt without him looking at it.”

Those two things — putting and green-reading — obviously work together. While there is nothing easy about doing it at the Tour level, it is easier for a really good caddie to read greens for a really good putter. Or, in the inverse, as Crawford says, “It’s tough to trust your reads if you’re reading them right all day and missing every putt.” A good stroke begets better reads. Better reads line up a good stroke. How simple! (Unfortunately for Trainer, I am the backup bag man, and a zero-time MSOP champion.)

Crawford’s father, Jim, will caddie for the caddie this week at TPC Twin Cities, a course with sizable greens running in the 12s on the stimpmeter. It’s nothing Crawford hasn’t seen (or caddied on) before, just a level he’s never competed in as a player. Crawford’s top experience in that department is 11 starts over the last four years on the Mackenzie Tour. Therein lies the beauty of Monday qualifying. Shoot the right score and you’re on Tour this week. No other credentials required.

Despite making the cut 21% of the time since the beginning of 2019 players who Monday qualify are up against the assumption that there is a reason why they were playing on Monday to begin with: That there’s just something missing. And perhaps there is. But perhaps this week there isn’t. When the workweek began with eight birdies and no bogeys just two miles south of here, why couldn’t it transition up Radisson Road to the 3M Open?

“My game is get it in play off the tee, hit the green, sink putts,” Crawford said simply. “I think that kind of frees me up, too. I’m not too worried about hitting the fairway. I just have to get it in play and then I just have to get it on the green from there. I’m not necessarily trying to attack pins all day because I know I’m going to make up strokes on the putting green.”