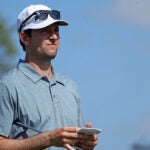 Martin Trainer began the week with long odds to win the Houston Open, but through Friday he's suddenly one of the favorites.

You didn’t have to look hard to understand the long odds that Martin Trainer had been given to win this week’s Houston Open — they were literally splashed across the screen of the Golf Channel broadcast Friday.

PointsBet listed Trainer at 1000-1, a number that appeared on the screen during Trainer’s second round. Others had him listed at higher numbers — GolfOdds had him at 2000-1 earlier in the week. In a 132-player field, Trainer held the second-longest odds, ahead of only Gilbert Mendez, an instructor at the local GolfTec in Austin, Texas.

But by Friday afternoon those numbers were ancient history. He was suddenly leading the tournament through two rounds. As he finished up on Friday, his live odds had plummeted to 16-to-1.

Trainer is ranked No. 1310 in the world. He has made just one cut since April, and he’s oh-fer in his five starts this Tour season.

“By the way, oh-fer-five — that’s been semi-regular for me the last couple years, unfortunately,” Trainer said on Golf Channel after his round Friday. “It can turn around quickly out here. You find that combination of hitting it well and putting well and it’s exponential. I was able to do both of those today.”

How did he reach the PGA Tour? By winning twice on the Korn Ferry Tour in 2018. He had three top 25 finishes that year, and two of those were wins. He doesn’t often contend, but when he does, he tends to win. And he’s in contention right now.

Trainer has made 11 birdies and just one bogey through his first 36 holes at Memorial Park Golf Course, essentially guaranteeing himself a spot in the final pairing when his third round begins Saturday afternoon. He’ll almost certainly be joined by Kevin Tway in that pairing, while the second round will officially get wrapped up Saturday morning.

The most impressive aspect of Trainer’s rise this week, beyond his mostly bogey-free play, is how he’s striping the ball. He’s hit 30 of 36 greens — including 16 of 18 during the second round — after finishing 198th on Tour in 2021 in Strokes Gained: Approaching the Green. But down in Houston, he’s peppering fairways and playing generally stress-free golf. Get yourself on the green and one- or two-putt. Sometimes, it’s as simple as that.