Caddie Chronicles: What’s a missed cut really like inside the ropes?

This is the fifth installment in Dylan Dethier’s week-long series in which he’s chronicling what it’s like to be a PGA Tour caddie from the Valspar Championship. You can also read dispatches from Monday, Tuesday, Wednesday and Thursday.

PALM HARBOR, Fla. – The week is over, and I am sad. I am not sad to be leaving Florida, where I have more or less taken up residence since arriving on Feb. 26, Tuesday morning of the Honda Classic. Nor am I sad about the way things went down this week at Innisbrook, where my player tried his best and I did too and our combined efforts weren’t particularly close to making the weekend. I’m excited to get back to my regular life, which I very much enjoy. But I’m sad the way anyone is sad at the end of an adventure they’d been looking forward to, one they may never experience again.

After Thursday’s round got away from us late and Martin’s score slipped to six over, the prospects of making Friday’s cut were immediately slim. Professional golf moves slowly, but bad things can happen quickly, particularly at the Valspar, where any single poor shot makes bogey the heavy favorite. Still, the cut was likely to slip to two over par — we still had a hope and a dream to play for, at least. 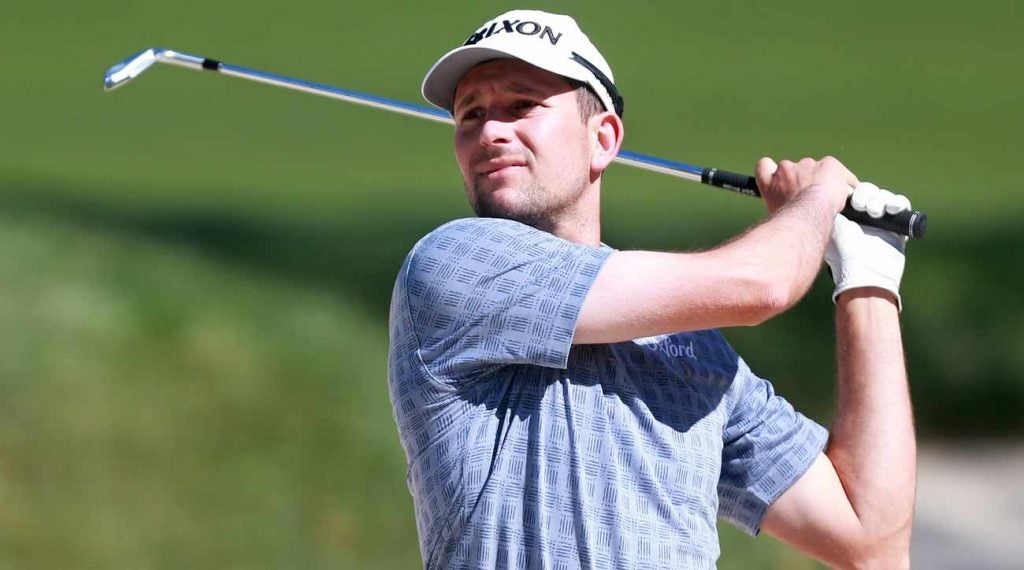 Spirits were high when we began the Valspar's second round in the Friday sun.
Getty Images

For the second consecutive day, Martin started the day with a series of impressive shots. His birdie putt at 10 just stopped short of the hole. His effort at 11 fell just to the low side. He made a tidy two-putt par at 12 and nuked an 8-iron over the green at 13 but got that up and down, too. His best look for birdie yet came from 10 feet at 14, but that broke just across the front edge.

He missed a two-footer for par at 15, slipping to one over for the day when it felt like he was playing well enough to be at least three shots better. His near-misses on the greens stood in stark contrast to Donald, who had hit just eight greens but shot four under on Thursday and picked up where he left off Friday.

The Duke (apparently nobody calls him this, but it felt right, so we’d started to) canned a 28-footer for birdie on 14 and a 35-footer for birdie on 15 to get to six-under and a tie for the lead. He raised his arms in triumph, fetched the ball from the hole and came over to join his caddie, as close to giddy as the Duke seems to get. “Alistair, just put me anywhere on the green. Anywhere!”

(You can see your resident caddie blogger in the background below…)

The Friday afternoon atmosphere, playing with the leaders under the Florida sun while drinks flowed and cheers roared from the bleachers, was undeniably cool. And because Kisner and Donald were near the top, the Golf Channel crew joined up with our group on 11 and stayed with us for the duration of the round.

Bones Mackay, legendary longtime caddie to Phil Mickelson, met us in the fairway at No. 12 as we waited for the green to clear. “Congratulations on the win in Puerto Rico,” he told Martin, before turning to me. “Heard what you’re up to this week,” he said. “How’s it going?” Great, I told him, though I was worried I hadn’t brought Martin much luck. “Well, that’s all right. It’s not like he’d be better off with Shipnuck,” he said with a smile.

Great form shown here by @dylan_dethier. Level shoulders, wide base, square to the target, gaze fixed on the putter exchange, left pinky in place for the wedge grab. A master class in green side caddie work from the supposed newbie. pic.twitter.com/dfTihJ31Ir

Some experiences transcend score. The 16th may be the most demanding hole at the Copperhead course, a 475-yard behemoth with water down the right and woods guarding the left, all before arriving at a sloped green in front of a stacked stadium crowd in the surrounding bleachers. Martin, fresh off a missed two-footer that sent him to seven over, ripped 3-wood down the middle, leaving just 163 yards downwind to a front pin. He first grabbed 9-iron, then switched to pitching wedge after a short discussion. It was a good switch, but mostly a fantastic shot, with the spin and height counteracting the wind and firmness of the green to stop ever so perfectly pin high and two feet left of the pin. The crowd roared with approval.

As we approached the green, Bones strolled over to intercept us. “Nice shot,” he said, giving me a fist bump. “Must have been that club selection.” This must be how caddies get outsized egos.

When it was Martin’s turn to putt, the crowd began buzzing; they’d been waiting for some excitement. “Give us a birdie, kid!” one person yelled. Martin firmed it off the center of the back of the cup, and you’d have thought from the eruption in the crowd that he’d won the tournament. He raised one arm in sheepish celebration, then thrust both into the sky. No matter his position in the tournament, this was worth celebrating.

That was about the last putt that would fall for Martin. He got a hard lipout at 17 from 10 feet, then a full 360 degree lipout at 18 from closer (he’d follow with the worst lip-out yet after we’d made the turn, a halfway-down betrayal at No. 7). Our outside hopes at the cut line went with the missed putts, and what was left was nine holes to soak it in, to enjoy the feeling of being inside the ropes and to watch Donald chase the lead and Kisner try to hang under par.

The pace slowed, though the wind stayed up and the course stayed firm and hard. Martin hooked his tee shot and mixed bogeys with pars while Donald continued to show off his short game sizzle, particularly at No. 5, where he went bunker to rough to bunker to the bottom of the hole for an unconventional birdie.

His last made cut was 376 days ago @ValsparChamp. He's battled injury and only made three TOUR starts since then.

He finished his Friday round only one back. 👇 pic.twitter.com/FqF4ujmPwf

The mood was lighthearted, for the most part; Martin’s not one to mope. One hole, he handed out most of his remaining Srixons, including four to one boy wearing a helicopter t-shirt who could barely hold all of them. “That’s gotta be a record, right? Four balls?” he asked. He hit a glistening 3-wood off the tee at No. 6 followed by a 9-iron to four feet for another birdie.

As we got to the 7th tee, where Martin had hit driver into a fairway bunker Thursday but hit 3-wood Friday, Kisner threw a playful jab my way. “What, you didn’t want to give him driver again today? I think there’s at least, like, four yards of fairway he could squeeze that thing into.”

As we made our way up the fairway, I asked Bones if he had any memorable rookie caddie tales, and his eyes lit up. One year at a particularly soggy edition of the Pebble Beach Pro-Am, Mickelson’s partner and his caddie introduced themselves to Bones. The caddie asked – did he have any advice? “Honestly, if you can make it the entire week without slipping and falling on your butt, that’s a big win,” Bones recalled. The caddie shook his head; he’d been hoping for something more substantive. “I’m serious,” Bones said. The groups teed off and started off the first tee box – where the caddie hit a wet spot, slipped and took a full tumble down the slope, sending clubs askew. Bones could only laugh. 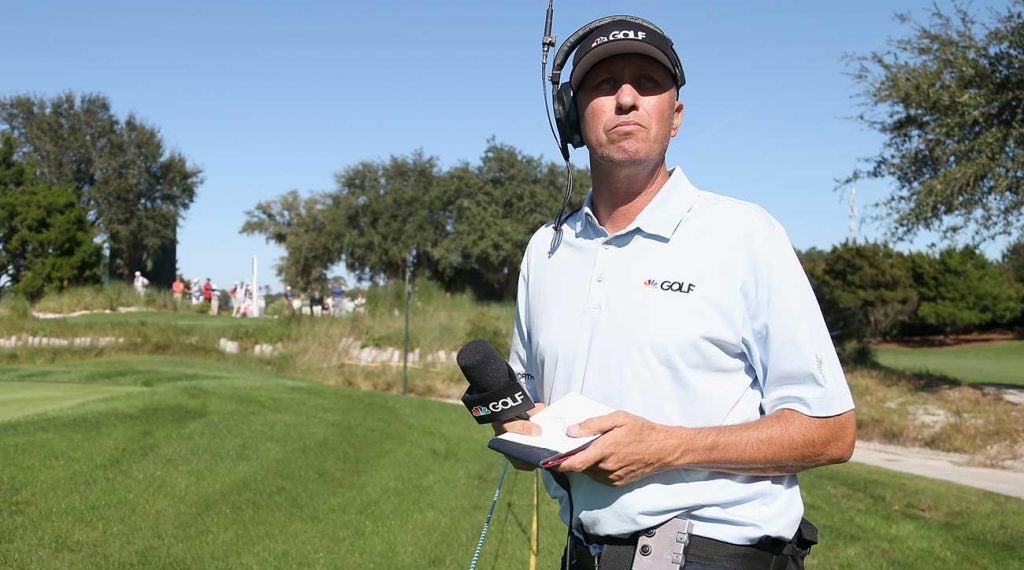 Hanging with Bones was an incredible, unexpected bonus from Friday at the Valspar.
Getty Images

In all, I felt far more comfortable on day two. Our on-course chemistry got much more in sync, I pitched in on some reads, and Martin was ever so close to making a bunch of putts. I felt increasing good about my work in the bunkers, of which Martin hit five. None of this necessarily reflected in a better score, though it’s tough to evaluate exactly why. For 36 holes, Martin made just 85 feet, 4 inches of putts, near the worst in the field.

But now, none of those specifics matter much. Once nice thing about golf’s formatting is that a missed cut is a missed cut, whether by one (as 16 players did Friday) or two or ten. We bid farewell to the new friends we’d made over the course of the week, cleared out Martin’s locker, loaded up the Valspar-stickered Lexus and readied for departure. We walked out to the parking lot with Keegan Bradley, who had held the first-round lead for a while. I thought about asking how his day went but reconsidered, and was glad I did once I checked the app: Bradley was well inside the cut line until he tripled 16 and bogeyed 18 coming in to finish at three-over and miss the cut, too. That struck me as a far worse fate than ours.

For Martin, what’s next is a much-needed week off back in his hometown of San Francisco after five tournaments in a row (the PGA Tour has a deal with United allowing for free cancellations, so players can have Saturday and Monday flights readied in case of an MC). That’s where he can put the clubs away for a few days, freshen up and soak in the joy of being a PGA Tour winner. He’ll be back in action at the Valero Texas Open. As for his temporary caddie? I’ll be back in the GOLF.com offices with a sunburn and a sore shoulder, ready to pace off the yardage from my desk to the Golden Tee machine. I’ll be staying fresh, in case I ever get the call back for round two.