Reversing course: Why Augusta National flipped its nines 85 years ago 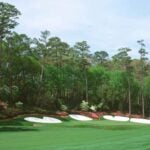 How would the Masters look if Amen Corner lived on holes 2, 3, and 4? For a brief period of time in Augusta National history, that was actually the case.

In many ways, Augusta National as we have come to know it is unchanged from the version that greeted members when the club opened the gates to Magnolia Lane for the first time some 87 years ago.

The club is still pristine, it’s still remarkably private, and it’s still home to some of the world’s best golf. But in one significant way, Augusta National as we’ve come to know it is nothing like the version that greeted members in 1932. In fact, the version that greeted members in 1932 might have a hard time considering itself Augusta National at all.

When Alister MacKenzie designed Augusta in the early 1930s, he designed the course you see today. The reachable par-5 second hole, Amen Corner just after the turn, the famed par-3 16th. But inexplicably, in the midst of development, he elected to flip the nines. Yes, the closing stretch we’ve come to know and love was once the closing stretch of the first nine.

Staff Picks: The best from Nike

Nobody knows why MacKenzie made the decision to switch, though David Owen, author of “The Making of the Masters,” offered the following theory.

So, with No. 10 as No. 1, and with No. 1 as No. 10, Augusta National began its storied history. Things worked well enough for a few years, but eventually, the green jackets grew frustrated. It was time to course-correct, literally, but not for the reasons that seem so obvious now.

No, Chairman Cliff Roberts and the Augusta National brass came to the decision to switch in part because of frost. The course thawed faster on the opening stretch than at Amen Corner, which meant that play could begin earlier if they flipped the nines back to MacKenzie’s original intention.

In the Augusta Chronicle, the announcement hardly raised an eyebrow.

“It was also announced that the order of play over the course will be changed this year, with the back nine holes and the front nine reversed,” a blurb in the Chronicle read, announcing the change. “Under the new plans, No. 10 hole will become No. 1 and the old No. 1 will be No. 10. The change was decided, officials said, because the first nine holes are more difficult to play than the last nine, and playing the easier holes first will give players an opportunity to warm up before reaching the intricate problems of the difficult holes.”

But it was that 90-word paragraph that set Augusta National on course to become one of the world’s most sought-after golf clubs. That paved the way for the creation of Amen Corner, The Bear’s return from hibernation on 16, and of course, Tiger’s triumph on the 18th.

As golfers round the turn at Augusta into one of the greatest closing nines in the sport, take a moment to appreciate the early morning Georgia frost for reminding us that even at a club like Augusta National, it’s never too late to reverse course.