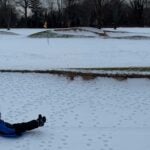 The fastest (and most fun) way out of a bunker.

Last Saturday, with two of my sons (14 and 8) in tow, I parked my car in the lot of a New Jersey golf course that shall remain unnamed and hiked out to the 3rd fairway to meet some friends. I was quite familiar with this straightaway, downhill par-4 — I’ve played the course probably 10 times — but on this chilly December afternoon, the 452-yard hole posed a decidedly different challenge than it had on any of my previous visits.

My sons and I weren’t intending to slap golf balls down the hill, we were going to sled down it.

Golf courses are useful for a range of activities other than just golf, from jogging and dog-walking to fishing and birding. But No. 1 on my personal list of faves is sledding. Some of my fondest childhood sledding memories came at Rye (N.Y.) Golf Club, which has slopes so slick they’d put a scare into Lindsey Vonn. Halfway down one of those pitches was a mound that we fashioned into a jump, which when hit at high speeds launched you like a Titleist off a 460-cc driver. Good times.

Potentially litigious times, too, of course, which is why, understandably, many golf courses prohibit sledding. New York City allows tobogganers in its parks but not on its golf courses. The pastime is also a no-no on municipal courses across much of Boston; Des Moines, Iowa; and Spokane, Wash.

Courses in other regions, though, welcome sledders. Scotch Hills GC, in Scotch Plains, N.J. (my town), has one of the area’s most popular slopes. Riverside Golf Course, in Portland, Maine, not only embraces sledders but also skaters, snowshoers and fat-tire bikers. Bethpage State Park, on Long Island, opens parts of all five of its courses for winter fun. Yep, the Black Course is for highly skilled golfers — and sledders.

A day or two before my kids and I trudged out to the 3rd hole, I began hyping it up like it was the Matterhorn. In my mind, the fairway was long, steep and fast. But when we arrived at the crest of the hill, the slope, under a blanket of snow, suddenly looked quite different than I had envisioned. It was, in fact, gentle, underwhelming, slow.

Like Sir Ernest Shackleton and his dogs, we pressed onward into the great white unknown.

The uneven, unpacked snow didn’t help. Near the bottom of the fairway, we could see some of our friends, backsides in sleds, who had arrived before us. They were stuck in neutral. After the icy slog we’d made to get out to this spot, my kids looks defeated — it was the equivalent of arriving at Wally’s World only to discover the park was closed.

The adult members of our crew convened an emergency meeting to discuss other options: Was the fairway on the adjacent hole any steeper? How about the bank behind the green at the 7th? The drop-off from the tee at the 13th? Like Sir Ernest Shackleton and his dogs, we pressed onward into the great white unknown.

By which I mean, we walked for about a minute and came upon a long, deep-faced fairway bunker.

“How about this?” said one of the kids.

Dropping in from the highest edge of the bunker — and I should mention here, we were careful to ensure we were doing no damage to the trap; at all times, we also steered clear of the greens, which everyone knows is Rule No. 1 of golf-course sledding — our kids quickly realized they were on to something. With each run, the trail grew smoother and faster, and soon enough, our junior sledders were zooming out of the far end of the bunker and down another 50 yards of the fairway. The bunker rake also proved useful in leveling clumpy patches. Glee, laughter, good times.

Not to go all Robert Frost on you, but the scene all around us was quite magical. The rolling property now capped in ice and snow. The flocks of Canada geese soaring above. The solitude and relative quiet.

Next time I’ll bring my clubs.

The secret to making Whistling Straits' show-stopping lamb entree, according to the course's chef