The Course I’m Thankful For: Sneaky rounds in the suburbs of New York City 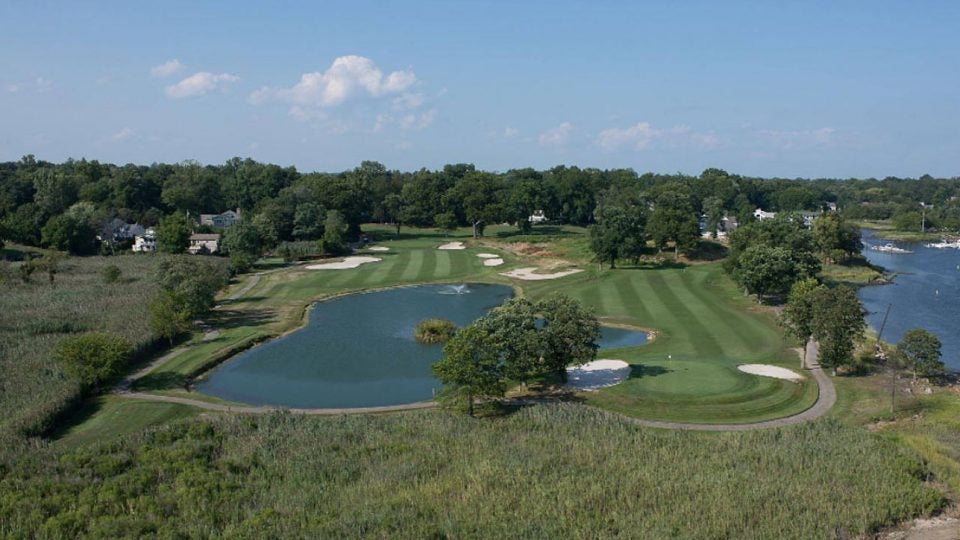 The watery 8th and 9th holes at Rye Golf Club were once a popular hangout for geese.

This is the first installment in our 11-part “The Course I’m Thankful For” series, in which we asked GOLF.com staffers to wax lovingly about the first course that stole their golfing hearts. Be sure to check back daily to feast on a new essay — or simply binge-read them all when you awake from your turkey coma. Happy Thanksgiving!

To get from the par-4 1st hole at Rye (N.Y.) Golf Club to the par-5 2nd, you must cross a leafy residential street called Soundview Avenue. I know this because Rye Golf, a city-owned private club in the ‘burbs northeast of New York City, is where I played most of my golf growing up. If memory serves, it was illegal to park on Soundview when I was coming of age in the early 90s, or at the very least the neighbors frowned upon my friends and I ditching our cars there. But that didn’t stop us. Risking tickets and dirty looks, we rolled up in a Jetta, Camry or ’87 Hyundai Excel hatchback with a beer tap for a stick shift (my ride!) and parked near the cut-through that connects the two holes.

When we were confident no one was looking, we made our move, grabbing our clubs (MacGregors! Maxflis! Tommy Armour 845s!) from the trunk, then scurried to the 2nd tee box hopeful that a ranger or member hadn’t spotted us. We’d typically play a quick nine-hole loop around the hilly Devereux Emmet design, completing our rounds at the par-3 10th, which sits just behind the 1st green. From there, we’d disappear back down the wooded walkway and into our getaway cars. Next stop: Sunrise pizza parlor, or someone’s basement.

We dubbed our sneaky rounds the “B membership,” and for a few years it was my primary means of accessing RGC. (My pals and I weren’t always such scoundrels; in previous years some of us had been upstanding, dues-paying junior members with dozens of legitimate rounds under our L.L. Bean belts. But once we aged out of that membership, we got creative.) We limited our trespassing to off-hours, usually weekday evenings, and never slowed up play or otherwise disturbed the peace. We were just dumb kids eager to put a peg in the ground. No harm done, right? At least that’s how we sold it to ourselves, and it certainly didn’t feel like we were committing any kind of heinous crime, save for the occasional topped tee shot.

I’m not here to endorse golf-thieving, but, man, were those rounds fun, beginning with the terrifying tee shot at the par-5 2nd, which plays uphill through (what felt like) a suffocating chute of trees. The 3rd is an unremarkable par 3, but I did witness something remarkable there: a friend – playing just his fifth or sixth round ever – drilling his tee shot into the front bunker, from where it popped out onto the green with just enough topspin to run up and into the hole. An ace! (Which dropped his score to about 11 over.) The next three holes run up and down a steep hill, which works overtime in the winter as a popular sledding destination. Nos. 8 and 9 are my faves, a pair of short par 4s hard against the Sound. The geese used to have their way with those holes, often requiring golfers to take relief from less-than-desirable lies.

The place has plenty going for it: variety, challenge, a 19th century mansion for a clubhouse, and on a clear day Manhattan skyline views. But mostly I remember RGC as a place where I shared laughs with friends. Like the time we caught our buddy Ramsay teeing up a ball in the fairway (lord knows how long he’d been pulling that stunt). Or the rainy afternoon when my friend Craig and I were recruited for the RGC junior golf team despite our inability to regularly break 100. (A powerhouse squad we were not.) Or the piles of cash I forfeited in bets to my pal Rob, who never seemed to give me enough strokes. He so reveled in taking money from me that, weirdly, I sort of didn’t mind giving it to him.

I occasionally get home to Rye, where my mother still lives, but I haven’t played Rye Golf since the weekend of my wedding. That was more than 13 years ago. Still, I know I’ll get back there again one day, and when I do I promise I’ll buck up for green fees.