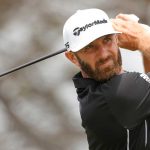 Dustin Johnson hits his tee shot on Sunday on the 5th hole at Torrey Pines during the final round of the U.S. Open.

At this week’s Travelers Championship at TPC River Highlands, who does the journalists and betting analysts like? Or the caddie? Or the old-school gambler? Gimme the facts, storylines and trends. Gimme that inside-the-ropes look. Gimme your gut feeling.

Bet 1: Russell Henley, top 10, +500. My first two bets are going to sound pretty similar. I like Henley to build off his strong play from last week.

Bet 3: John Pak, top 40, +500. This year’s Nicklaus Award Winner stays around for the weekend in his second Tour event as a pro.

Bet 1: Bubba Watson, top 10, +500. Bubba’s past three finishes haven’t inspired much confidence, but he’s a three-time winner at TPC River Highlands. If there’s any course that can pull him out of his current funk, this is it.

Bet 3: Scottie Scheffler, top 20, +125. Scottie is on a nice run, with a T7 at last week’s U.S. Open and a solo third at the Memorial. He missed the cut at the Travelers last year, but I think this year will be a different story.

Bet 1: Bryson DeChambeau, to-win, +1,200. Bryson put on quite a display last Sunday at the U.S. Open, shooting a 44 on the back nine to fall out of the top 20 after leading the championship while standing on the 11th tee. I believe he will bounce back and will do so at a course at which he has had past success. Bryson has also been very good at other Pete Dye courses, namely TPC Sawgrass and Harbour Town. My feeling is this tournament will ultimately be a short-game contest, and Bryson is actually an excellent putter, ranking 37th on Tour in SG: Putting. That, combined with 45th in SG: Approach, and I think he’ll have a ton of looks at birdie this week in what should be a birdie fest.

Bet 2: Patrick Reed, to-win, +2,200. Reed finished with a really strong round on Sunday at the U.S. Open, and I’m betting he can build upon that here. He has arguably the best short game in the world, and his lack of length off the tee won’t matter here at this short track. Also a great performer at correlated courses like Innisbrook for the Valspar and Sedgefield for the Wyndham, Reed, too, ought to be in the mix in the end.

Bet 3: Cameron Tringale, top 20, +335. I went heavy on the short game with all of my plays this week, and Tringale is no exception, as he is 10th on Tour in Scrambling and 18th in SG: Putting. He, too, has had tremendous success at correlated courses: third at the Valspar, third at the 3M Open, and fifth at the Rocket Mortgage in 2019.

Bet 1: Abraham Ancer, to-win, +2,800. Ancer has finished eighth and 11th the past two years here. He has missed two straight cuts, but is not far removed from finishing fifth at the Valspar, runner-up at the Wells Fargo, and eighth at the PGA. And who is the leader in strokes gained on Pete Dye courses over the past 24 rounds? The “Ancer” is Abraham.

Bet 2: Rickie Fowler, top 10, +600. Fowler did not qualify for last week’s U.S. Open, but the game has shown some life lately. He finished eighth at the PGA, which was his best finish in a major since the Open Championship in 2019, and followed up with an 11th at the Memorial. Rickie could go well here, a shorter course, leaving the driver in the bag. He comes in with a good frame of mind off the course, too, as he and wife Allison announced that they are expecting. Nappy factor?

Bet 3: Si Woo Kim over Russell Henley, -120. Si Woo’s best finish here is an 11th last year, but he is always someone you must consider on Pete Dye designs. Henley was a contender at the U.S. Open for about 63 holes before falling out and finishing just outside the top 10.

Bet 1: Doc Redman over Sam Burns, +115. Redman has been playing awesome the past month, including finishing second his last time out before getting some rest. Finished 11th here last year in his debut. Burns has cooled off a bit in his past three starts, including a MC at the U.S. Open last week. He’s made the cut in the two times he’s played here, but his finishes are nothing spectacular. I feel Redman is more fresh and has more to prove.

Bet 2: Stewart Cink, top 10, +750. I can’t believe Cink is 100-1 to win a tournament he’s won two times — in a season in which he’s won twice! Crazy. And he’s had a lot of wins the week after a major championship. Checks a ton of boxes. Trying to make the Ryder Cup. Too good to be true?

Bet 3: Rickie Fowler top 10, +600. The soon-to-be #GirlDad is coming in off an eighth and 11th the past two times he’s teed it up. Sat around and watched his buddies play the second major this year without him. Finished 13th a couple times here before. I think he’s gonna keep the pedal down this week.

Bet 1: Dustin Johnson, to-win, +1,300. DJ has been in a strange slumber, but he’s shown signs of stirring in recent weeks. Maybe getting knocked from his world No. 1 ranking will finally jolt him fully awake. He’s the defending champ here, so all the more reason to risk a few clams on him.

Bet 2: Bryson DeChambeau, to-win, +1,200. Betting the chalk has generally been a good policy this season. Bryson is definitely the chalk.

Erick Lindgren. Lindgren, the 2008 World Series of Poker Player of the Year,  has won more than $10.5 million in poker tournament earnings and is an avid sports bettor. @EdogPoker

How to bet on the Travelers Championship — for free!

The smart way to bet $1,000 on the WGC-FedEx St. Jude, according to an expert

How to put a new twist on an Arnold Palmer, according to a golf-club chef