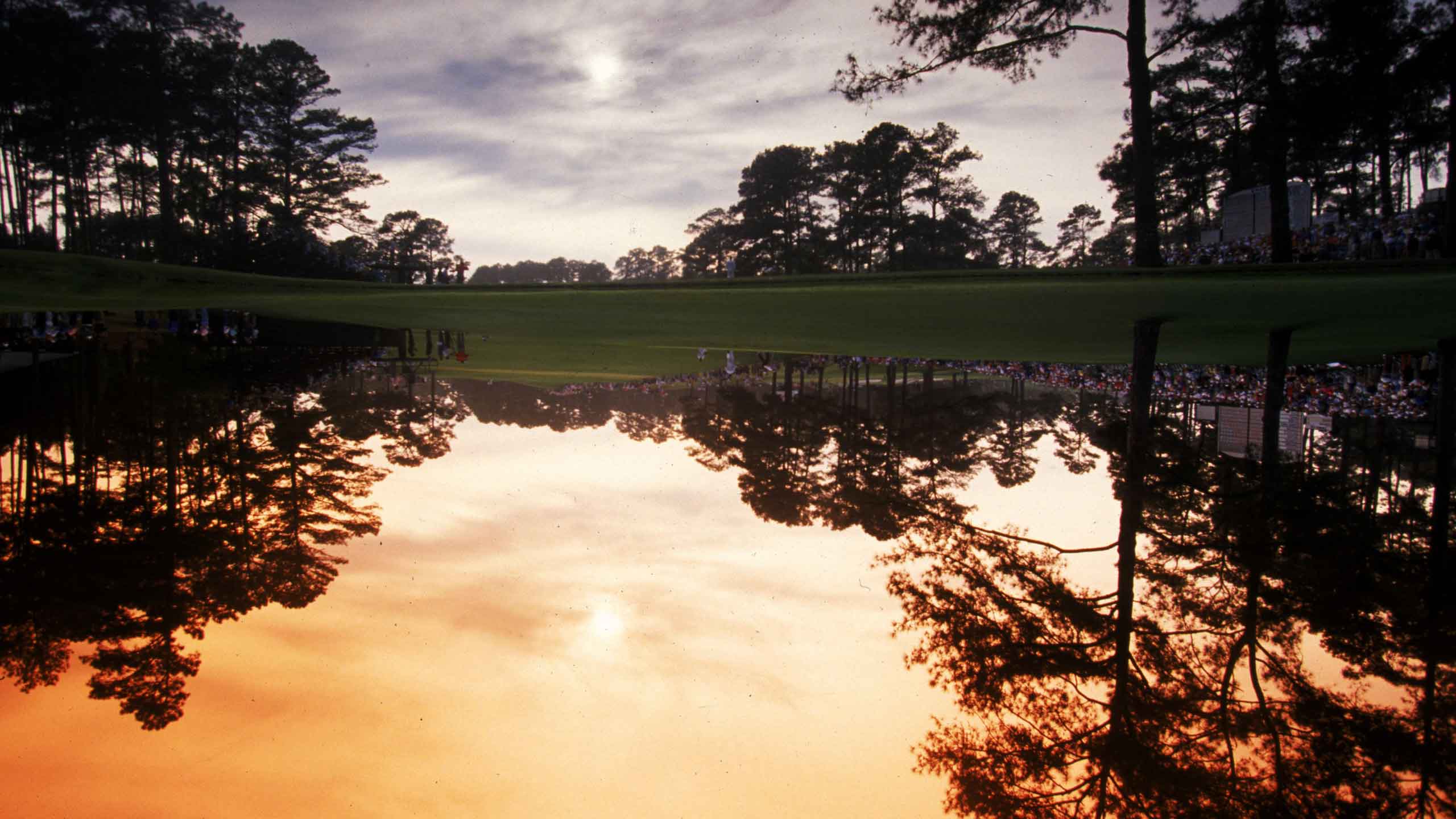 What fish lurk in the waters of Augusta National Golf Club?

Augusta National Golf Club is, as its founders intended it to be, a seasonal operation. The club opens in the fall for member play, closing its gates shortly after the Masters each year for a lengthy offseason. Several cottages dot the property where members can rest their heads for a day or two during their infrequent visits to the club.

But there is one population of year-round residents who call arguably the world’s most famous golf course home. And no, they aren’t the legendary greenskeepers who last year took a browned-out dormant course and transformed it into an impeccable Masters-ready horticultural gem in weeks.

In fact, they aren’t human at all.

Augusta National’s creeks and ponds are teeming with fish. And not just any fish, but big, hulking monsters that stalk the banks of Rae’s Creek and just about any place that holds water on the property. At least that’s the theory we’re putting forth here.

As with many things at the famously buttoned-up golf club, information on Augusta National’s resident fish is hard to come by. Stories about people actually trying to catch them, successful or otherwise, prove even more elusive.

Yet a few anecdotes and tall tales have made it out beyond the pavement of Magnolia Lane. With those stories and a little bit of knowledge about fish and fishing, we can begin to get an idea for the kind of fishing honey hole we’re dealing with off of Washington Road. If you can’t wait and want to immediately read some first-hand accounts about fishing at Augusta, by all means scroll down and have at it. But a more complete picture requires a little background information.

First off, what kind of fishes are they? (Fun fact: “fishes” is the correct plural form of “fish” when referring to multiple species.)

This question is easy to answer without even diving into the first-hand reports. I can say with a high level of certainty that the primary scaled inhabitant of Augusta National’s waters is perhaps the most American fish of all: the largemouth bass. Often called the most popular gamefish in the country, largemouth bass are native to the southeastern and central United States, as well as northern Mexico and some parts of southern Canada.

But these hardy fish can live just about anywhere, and as a result of 100 years of stocking and natural spread, you can now find largemouth in just about every living river, pond and lake in the continental United States, including at many, many golf courses.

In fact, sneaking onto golf courses to catch bass is a popular activity among fishing Youtubers, a flourishing corner of the streaming site that, much like golf, only accelerated amid the Covid-19 pandemic. (Fair warning for fishing enthusiasts who have stumbled upon this article and aren’t familiar with the golf world: don’t try this at Augusta National.)

Largemouth bass are not only native to Georgia, they’re also the official state fish, a honor bestowed upon the species by several southern states, where largemouth are known to grow bigger and more quickly than their northern counterparts.

As with many fish, female largemouth grow far larger than males, with the current world record topping out at 22 pounds and 4 ounces. Angler George Perry caught that fish in 1932 in Lake Montgomery. Where is Lake Montgomery located? Georgia.

Now that you know the world record you can forget it, because you will never lay eyes on a largemouth that, well, large. These days, a 5-pound fish will make an angler’s day, while catching a bass weighing in the double-digits is often a lifetime pursuit. Still, all of this data suggests the bass that make Augusta National home have a serious pedigree.

Two other facts hint at the size of Augusta’s scaley beasts. First, many reports claim that bream crowd Augusta’s waters as well. “Bream” is a local catch-all term for a family of small fish native to large swathes of the U.S. that include bluegill, green sunfish, pumpkinseeds, and many more species. These fishes belong to the same family as largemouth, and they happen to be among their favorite prey. Second, even though a detailed ANGC angling history is impossible to come by, we do know that few people step foot on the property every year, and even fewer of them go fishing. So these fish are unpressured and mostly left alone to eat and grow. These factors combine to suggest Augusta’s have everything they need to grow to immense weights.

Now that you’re more thoroughly informed about bass than you ever wanted to be, let’s get to the fun stuff. While Augusta National fishing stories are rare in the public domain, here are a few notable exceptions, all of which support my hypothesis.

Bean lands beast and spills the tea on Snead

A few years back, GOLF’s own Josh Sens caught up with 11-time PGA Tour winner Andy Bean to pick his brain about the best fishing spots on the PGA Tour. One of the now 68-year-old’s top picks was none other than Augusta National…

You’ve heard of Bassmaster. But bass at the Masters? You bet, says Bean, who used to fish Augusta during tournament week, and once landed a seven-and-a-half pound bass from the banks of a pond on the par-3 course. “People would say, ‘You’re crazy. You’re going to Augusta and you’re going to fish?'” Bean says. “But I’d be on the golf course at 7 a.m. I’d practice, I’d play, then I’d practice a few more hours. Then the last half hour, I’d go fish. Now that’s something special.” Private waters, sure, but open to a man who’d earned his way onto the grounds. “I don’t think it’s something they really publicize, but I’m not the only one,” Bean says. “I’ve got a photo of Sam Snead, fishing right off No. 4 on the par-3. It’s one of the coolest things you’ll ever see.”

Two important takeaways from this story: 1. While bass have been reported in almost all of Augusta’s waterways, the ponds on the par-3 course seem to be an especially good place to find them, whether that’s because the club prefers people to keep their rods off the main course or because they genuinely present the best fishing opportunities.

2: Seven-and-a-half pounds! Even if Bean is fudging the numbers a bit, as anglers are wont to do, this is a big fish, bigger than the biggest largemouth I caught last year, which admittedly isn’t saying much (hello four-and-a half-pounder caught in Brooklyn, photo below). But is that size of a bass believable? Absolutely. While it’s a trophy-size no doubt, bass in Georgia easily grow this big, especially when they are rarely harassed by anglers. Furthermore, bass spawn in the spring and early summer, at which time the females grow fatter and heavier as they become engorged with eggs. A five-pound fish caught in early fall could easily reach seven-and-half pounds during the spawn. It also means that Augusta’s bass are likely at their biggest every year during Masters week. With this story alone, I’m confident in saying that at least a few 10+-pounders call the home of the Masters their home.

President Bush’s man on the inside

Back in 2015, writer Meg Mirshak penned a story for the Augusta Chronicle about a friendship between former President and Augusta National member George H.W. Bush and an Augusta caddie-turned driving range supervisor, a friendship built on fishing together at the storied club.

According to Mirshak’s report, Charles Hatney “Bull” Williams played guide and fishing buddy to the late president on many occasions at Augusta National. In a letter to Williams in 1995, Bush wrote, “Bull, some day I hope we can fish again. Meanwhile, don’t let those pros rip off your range golf balls, and don’t let anyone catch all the bass in the ponds near the par three.”

Mirshak recounts that Williams’ cousin has a photo hanging on the wall of his home featuring Bush and Williams, fishing poles in hand, smiling for the camera in front of Ike’s Pond. Williams, who died in 2015, retired from the club in 2011, after which Bush wrote him saying, “Who’s going to go fishing with me? Who’s going to help me get around the links down there?”

Augusta National’s connection to the White House goes further back than Bush 41. Its presidential fishing history does, too. Dwight D. Eisenhower was arguably the golfiest president of all, reportedly playing an astounding 800 rounds during his years working in the Oval Office. He was also a member of Augusta National, and an influential one at that.

While he unsuccessfully petitioned the club to cut down what came to be known as Eisenhower’s Tree, the 34th president did leave a lasting physical impact on the property.

As the story goes, in 1949 Eisenhower suggested the club dam up the small pond along the 8th and 9th holes on the par-3 course in order to create a fishing hole. Then-chairman Clifford Roberts agreed, creating what came to be known as “Ike’s Pond.” The club may or may not have proceeded to stock the new pond with bass and sunfish at Ike’s request, but either way, we know it has become one of the best fishing spots on the property, especially during Masters week, and Eisenhower regularly soaked a line there and elsewhere on the course.

During his own Augusta fishing investigation for Forbes in 2011, Monte Burke hit the usual Augusta roadblocks in his research, that is until he contacted former caddie Tripp Bowden. Tripp offered up all the details on the best places to catch lunkers on the storied golf grounds.

Augusta National is “full of fishy spots,” Bowden told Burke, a fact any bass angler would guess when watching the Masters on TV each year. While he confirmed that Ike’s Pond was its namesake’s favorite spot to throw a cast, he also informed Bowden that “some of the best fishing was found on the mother course.”

Bowden claimed caddies loved to fish in the most iconic corner at Augusta, if not all of golf: Rae’s Creek in front of the 12th green. He reported that the prime target there was bream, which proliferated in the creek. If the bream are there, you can bet there are a bunch of big largemouth who spend time there eating them.

But according to Bowden, it’s another iconic par-3 that anglers should focus their attention on if they ever get the chance to fish at ANGC: the pond that runs along the 16th hole.

While I’m confident in my theory about Augusta’s fish, there’s no way to be 100% certain without fishing there myself. If that’s a story you’d like to read, by all means write the club and put in the good word for me. I’m not holding out hope. But at the very least I hope that when you’re watching the Masters next week, and yet another ball finds the bottom of Rae’s Creek, you take a moment to imagine a big bucket-mouthed fish glancing at it briefly before swimming off to find another sunfish to devour.