There’s plenty to take in from the new Augusta National Golf Club overhead imagery posted by Google this week. The new upload was first spotted by Lou Stagner (a worthwhile Twitter follow) and quickly made the rounds among golf fans, most of whom live in a constant state of thirst for any behind-the scenes peek at Augusta. The photos, which were allegedly taken in September, reveal a dormant golf course under heavy maintenance — and may tell us something about new construction, too. Here are five things I noticed while browsing the browned-out National. 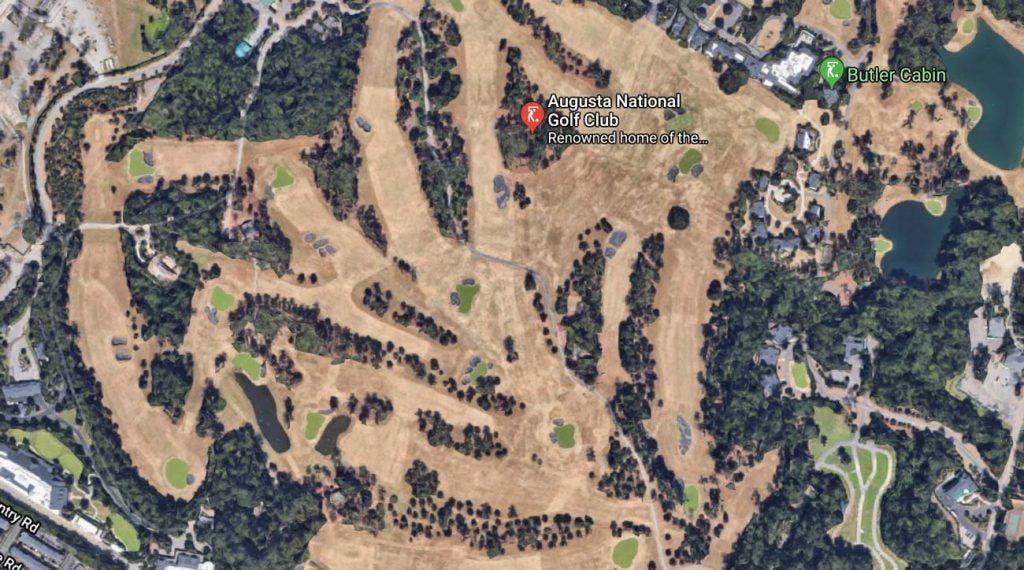 1. The bunkers are black.

We’re used to the blinding-white sand of Augusta National’s bunkers, so it’s particularly striking to see them hollowed out and sandless. It’s not immediately obvious whether what we’re seeing is bunker lining (seems likely) or some sort of tarp — but either way, Augusta is going to need to ready its trucks for a shipment from the Spruce Pine Mining District in northwestern North Carolina, where the club gets its sand. (The sand is largely comprised of quartz, a waste product of the feldspar mining process, which gives it that bright white coloration.) Where’d the old sand go? Your guess is as good as mine. 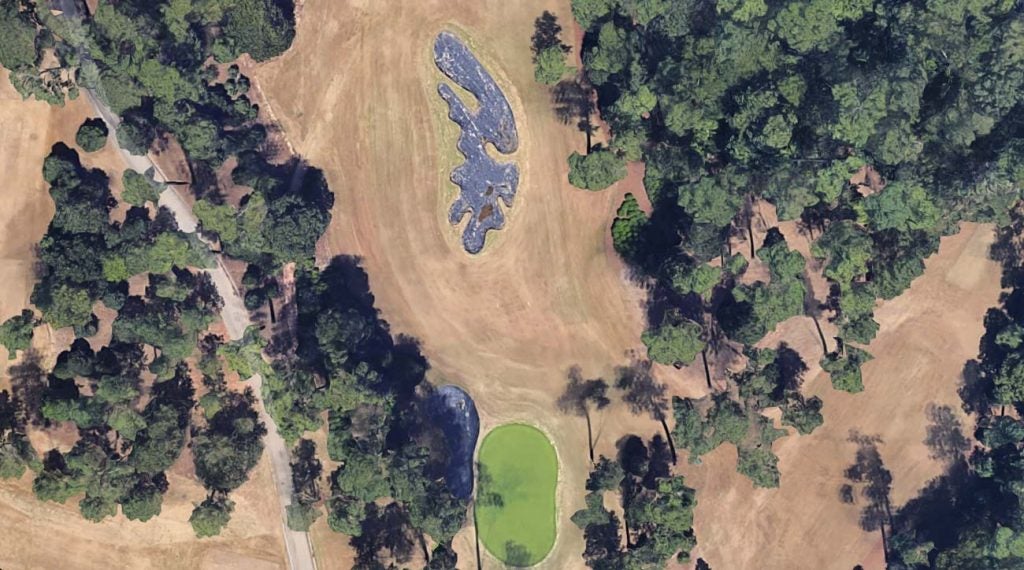 There's no bunker at Augusta quite like the (typically) bright-white expanse guarding the 10th green.
Google Maps

One particularly radical change Augusta could make would be going with dark bunkers full-time, like the black coal slag “sand” favored by some courses in the northern U.S. (like Hawktree Golf Club in Bismarck, N.D.). But don’t hold your breath.

2. The greens are really green.

It’s fairly common to see winterized golf courses use a different type of grass — or a green-dyed fertilizer — on fairways and greens, creating major visual contrasts. But it’s rare to see the greens pop quite this hard. Augusta National’s greens are the only hint of green on the entire property (except for the apparently overseeded tee box on No. 13 — but more on that later) and wow, they’re green enough to look game-ready. The only exception is No. 9, which appears to be in the midst of some major top-dressing (you can see the contrast with No. 18 below). 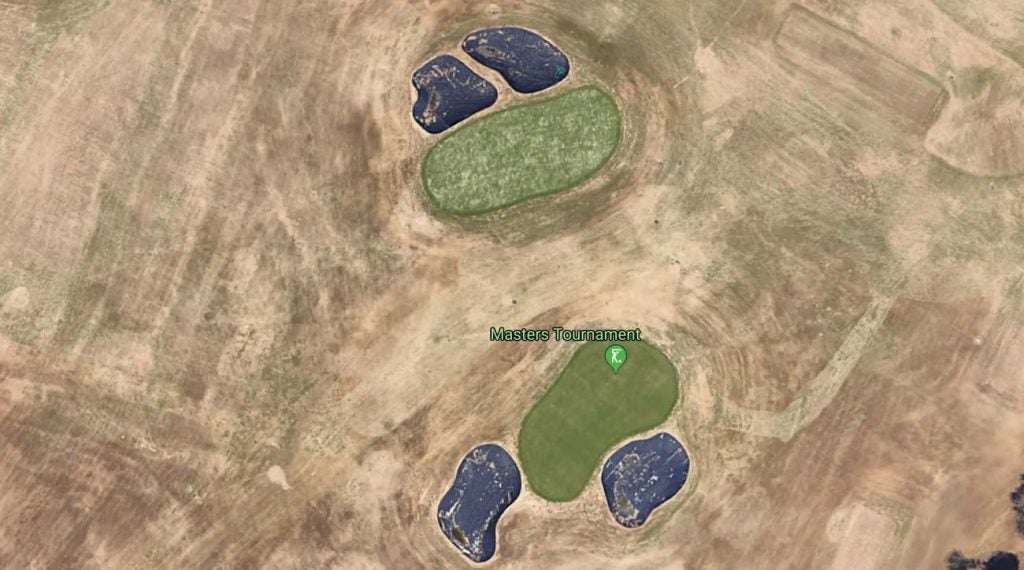 The sandy 9th green (top) in contrast to the bright-green 18th (bottom).
Google

But yes, that is grass on the fairways. The main turfgrass at Augusta is bermuda, which stops growing at the end of the summer, as the nights get cooler, growing dormant and brown — or it would, except that Augusta pre-empts part of that process by “scalping” the bermuda, cutting it down to nearly nothing. That preps the ground to undergo an intensive ryegrass overseeding to get ready for member play in October, and that bright-green overseeded ryegrass is what comes roaring through your television screen every April. The greens are Penn-A1 Bentgrass, which actually fare better during cooler weather — part of the reason the club is closed every May to October. 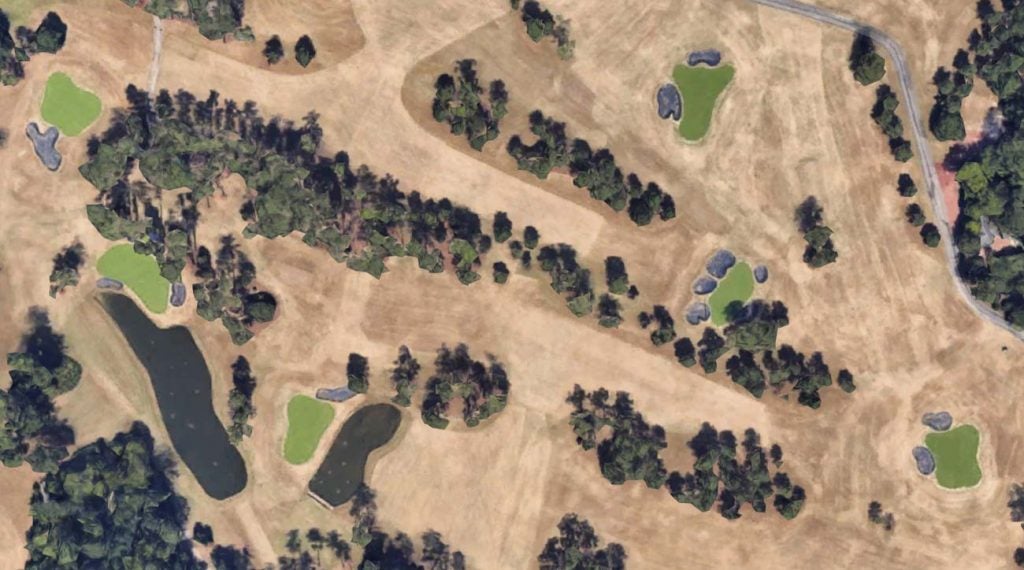 The bentgrass greens at Augusta really pop next to the dormant bermuda.
Google

3. There are a ton of hidden greens.

How many greens are there on the property at Augusta National? Offhand, you might think the 18 greens on course plus a couple practice greens. But a closer look reveals a whole gaggle more than that, which can’t hide in the offseason. There are the 18 on course. There’s the putting green behind the first tee (19). There are the nine greens on the par-3 course (28) plus two others in the area between Magnolia Lane and Butler Cabin (30). There are three more greens in the short game area adjacent the driving range (33) plus five additional greens on the range itself, although I’m not sure if they’re kept in the same condition (38).

Finally, there’s a green hidden on a cul-de-sac by some housing behind the 11th tee (39) plus four more greens by Berckman’s Place (43) and one, final lone green behind hedges near the second tee that was the subject of a Michael Bamberger investigation last year (44). Forty-four greens! That seems like a lot for an 18-hole golf course.

It looks to be hidden in the woods between the 5th, 6th and 7th holes. Longtime Augusta Chronicle scribe Scott Michaux says he’s heard the building may function as some sort of facility for members to take advantage of during tournament week — perhaps a restaurant. Even on the uber-exclusive grounds of Augusta National, there are still wildly varying levels of access. We’ll see if you need a green jacket to take advantage of this place.

Nice find! Got me searching. Looks like there’s a new structure on course by 4/6/7 area. pic.twitter.com/giKW4VyTid

In a useful explainer from the knowledgable Michaux, who has covered all things Masters for decades, he points back to chairman Fred Ridley’s press conference before the 2019 Masters.

“It should come as no surprise to any of you that we continue to study other enhancements to the golf course; that includes much‑talked‑about changes, potential changes, to the 13th hole,” Ridley said. “Admittedly, that hole does not play as it was intended to play by [Bobby] Jones and [course designer Alister] MacKenzie. The momentous decision that I’ve spoken about and that Bobby Jones often spoke about, of going for the green in two, is to a large extent, no longer relevant.

“Although we now have options to increase the length of this hole, we intend to wait to see how distance may be addressed by the governing bodies before we take any action.”

Those remarks come with the important context that Augusta spent tens of millions of dollars buying the adjacent 9th hole at Augusta Country Club, establishing complete ownership of the perimeter of the game’s most famous stretch of holes (and avoiding the possibility of a mid-tournament shank from play at ACC onto the 13th tee at ANGC). Michaux and hawk-eyed Twitter user Alexander Gough point out that a bridge has been added over Rae’s Creek as part of a maintenance road addition that loops behind the current 13th tee.

I say “loops” and “current” with some intentionality here because the road’s placement allows for at least 75 additional yards to be added to the tee shot, a distance that would make the corner much harder to reach for even the game’s big bombers.

Luke Donald threw some cold water on the idea that a new tee is already under construction. “Just working on the new road,” he wrote on Twitter. Still, it’s hardly a far-fetched conspiracy theory to think that those piles of rock would be logical places for a new tee box.

Feel free, of course, to continue perusals of a dormant Augusta National on your own time. Consider important questions like, “Why (and how) is Rae’s Creek dry?” or “Are those tunnels, and where are they leading?” Just don’t expect to get an official answer.