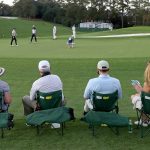 Arriving early to the Masters? Make sure to put your chair down in the perfect spot.

Masters week is nearing. Meaning it’s time to freshen up on Augusta National- and Masters-centric rules. And for those who are lucky enough to step on site, you better make sure you remember them.

You really shouldn’t run at most golf courses, but you definitely don’t run at Augusta National. One of the best sights of the week is Thursday morning, when the gates open and eager khaki-donning patrons speed-walk to their go-to spot and set down their chairs. It’s as close to a well-organized parade as you might ever see on a golf course.

Remember, above, how we said those patrons put down chairs? It’s one of Augusta’s greatest traditions. Find a spot of your liking — 1st tee, 4th tee, 6th green, Amen Corner, 18th green, etc. — plop your chair down and go walk around until you come back to it later. It will still be there, ready for you to kick up your feet and relax.

This is a big one. Don’t bring it, don’t do it. But this is also a double-edged sword. You might be pleasantly surprised just how peaceful it is to be on a golf course and at a golf tournament and not have to worry about checking your phone every few minutes. It’s good for the soul.

Remember, it’s “patrons,” not “fans,” at Augusta National. You also say second nine instead of back nine, and second cut instead of rough, among other Augusta-isms. Analysts have to be careful, too, as Gary McCord wasn’t invited back to broadcasts after a 1994 incident when he said greens were smoothed with “bikini wax.”

David Feherty spent 19 years covering the Masters stationed about the 15th green, and he’s admitted it was difficult for him to call the Masters with his trademark wit. He spoke about one instance when his comments weren’t in line with what the video feed his showing, which meant his one-liner lacked the necessary context.

5. No cameras on tournament days

One thing I always say about the Masters, is that if I were a patron and nabbed a golden ticket, I’d rather go on a practice-round day instead of a tournament day. The main reason is because you can take your camera and snap photos during practice rounds — but not when the tournament starts. I can see Dustin Johnson hit driver at any Tour stop; but I might only get once chance to take my Canon around Amen Corner.