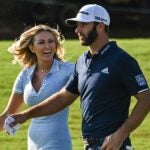 Dustin Johnson and Paulina Gretzky at the 2020 Tour Championship.

Dustin Johnson stands on the cusp of a career-changing moment on Sunday at the Masters. The World No. 1 is within grasp of his second career major championship, and he’s doing so with his family in close quarters. On Sunday, DJ will play with his caddie and brother Austin, and alongside his fiancee, Paulina Gretzky, who has been on site most of the week.

Johnson and Gretzky are golf’s preeminent celebrity couple. “The Great One’s” daughter and the World No. 1 have been engaged since 2015, and part of our PGA Tour Sunday ritual for much longer.

The two first met in 2009, when Dustin came over for a family dinner after being paired with Paulina’s mother (and Wayne’s wife) Janet in a pro-am. As GOLF’s Alan Shipnuck first reported, they didn’t go on their first date until 2012, if it can even be considered a first date. The pair welcomed a surprise third-wheel for their first-ever romantic endeavor.

“I don’t know if you can call it a date since my dad tagged along,” Paulina said.

“That’s how it goes in our family,” Wayne said. “Janet and I go out to eat, and we somehow always wind up with seven or eight people at the table. Everyone is invited.”

While Wayne stopped tagging along, the couple stuck. In 2015 and 2017, they welcomed two children, Tatum and River, together.

Now, the family is a welcome addition to the Gretzky-Johnson relationship, traveling with DJ for many of his events.

“What am I going to do?” Johnson asked after securing the 54-hole lead at Augusta on Saturday night. “Well, when I get back to the house, I’ll play with my kids. They are here. Hang out with Paulina. Her family’s here. So just going to have some dinner and hang out at the house.”

Check out photos of DJ, Paulina and the family below.