Who are all the people at Augusta National watching the Masters? 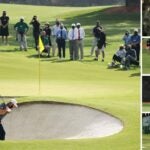 The 2020 Masters doesn't have its usual set of spectators — but the grounds aren't empty, either.

AUGUSTA, Ga. — As Dustin Johnson stood over his birdie putt at No. 16 on Saturday afternoon, a murmur ran through the crowd: A golf ball had just come skipping off the back bank at No. 15 and into the water. Splash.

Wait — a murmur ran through the crowd? What crowd?

There are no fans at this year’s Masters. At least, no patrons. Not in the typical Masters way. Certainly not in the way there were at last year’s Tiger Woods coronation, when spectators ringed the closing holes three and five and 15 deep.

But there are still plenty of people on property. They’re masked (besides the players) and they’re Covid-tested (each had to show a negative test to get in) and they’re there. A crowd of at least a couple hundred followed the final groups on Saturday evening, and similar crowds followed the tournament’s most intriguing figures during early-round action: Tiger and Bryson DeChambeau and Rory McIlroy and more.

Don’t get me wrong — the wide-open expanses of Augusta National look far different than usual, and most of the field is playing in peace and relative anonymity (except, of course, for the fact that they were all on camera the entire time). But who are the spectators? Who are the folks interrupting the ocean of green in the backgrounds of your television screen? Let’s run through ’em:

Let’s start with what we know. The media center is decidedly emptier this year — just one person every three workstations — but there are still a number of writers and reporters on site, contributing to a variety of fine publications…most importantly the one you’re reading right now!

These pretty Augusta National snaps aren’t taking themselves! Plus, there’s something kind of cool about seeing those big lenses in the background. This is a big-time event, after all.

Example: Stephen Denton, who’s taking pictures for us this week. Here’s a cool shot he took of Brooks Koepka:

No, not the minor league baseball team. We’re referring here to the green-jacketed members, who are performing various roles this week that range from 1st-tee starter to press conference host to looking vaguely important while supervising activities around the clubhouse.

It’s my understanding that in normal years, every on-site member wears his or her green jacket at the Masters. This year, a far higher proportion of the people on site are members — they’ve been allowed to attend all week — and so they’re dressed as civilians. Still wearing lots of green, though.

Each member is allotted one guest, so many members have been attending with their significant others. The effect here is a particularly clubby feel; nearly everyone on site who isn’t working is either a member or married to one.

There are a few specific roles performed by volunteers at the Masters: monitoring fairway crosswalks, spotting golf balls and changing the analog scoreboards sprinkled across the course. Usually the need for crowd control demands far more volunteers, but this week these jobs are pretty chill.

Example: The scoreboard operators who tried to help Bryson DeChambeau find what turned out to be an unlucky lost golf ball just off the fairway at No. 3 on Friday.

Normally Augusta National has notably cheap concession stands open to all spectators. This year, we’re even more spoiled on site: The concessions are slightly more limited, but they’re all free! And they’re staffed by some incredibly friendly individuals.

Augusta National is typically a tricky place for coaches to do their jobs, because they’re not allowed inside the ropes during practice rounds. But this year is decidedly different, which means we’re getting a much clearer look at who’s on site with players.

Example: Chris Como. Bryson DeChambeau’s coach has been by his side on the range for much of the week.

In addition to their coach, players can bring in one guest, which usually means a wife or girlfriend. These guests have a much better view of the action this year, with far fewer crowds to navigate.

One of my favorite random things about the weekend at the Masters is seeing which players miss the cut but stick around to use the driving range on Saturday and Sunday anyway. Last year, Mike Weir missed the cut but hit some extra balls to get ready for his next start at a Korn Ferry event he was playing the following week.

A few other players stuck around Saturday afternoon despite missing the cut. Jason Day and his wife Ellie strolled into the pro shop in the late afternoon despite his second-round 78 — some early holiday shopping, perhaps.

There are the former champions, too, who typically stick around for the green jacket ceremony. But they’re not the only ones: Last year it seemed like half the players in the field stuck around to take in Woods’ winning moment. If Dustin Johnson finishes things off on Sunday, chances are he’ll have some well-wishers waiting to greet him, too.

They won’t have to fight the crowds to do so.